Maybe it was the freshly back-to-college crowd, or maybe there's just something different about a show at Abe & Jake's Landing, but Tuesday night's Victor Wooten/Blues Traveler concert at the downtown venue was more kegger than concert.

Originally booked as a concert for Wooten, the extraordinary bassist best-known as a member of Bï¿½la Fleck's band the Flecktones, the Wooten band allows him to exercise his funk chops. 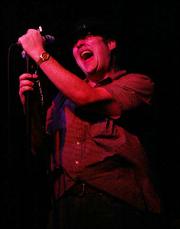 Wooten's ensemble features older brothers Regi and Joseph on guitar and keyboards and rapper/DJ Speech from the hip-hop unit Arrested Development. Playing mainly selections from his albums "Yin-Yang" and "Live in America," the funk was furious and good-natured if a bit repetitive at times. (The recent addition of Blues Traveler to the top of the bill didn't relegate Wooten to opening-act status; he played for nearly two hours.)

By the time he finished and the stage was reset for the headliner, the audience was well-primed. Blues Traveler responded by playing two hours of relentless, hard-charging blues rock.

Though this is a group that's capable of subtle dynamics, they were mostly absent Tuesday night. Covers like The Beatles' "Blackbird," "Woke Up This Morning," best-known as the opening theme from "The Sopranos," as well as their own "The Mountains Win Again" varied the pace some.

The concert felt like two hours of hanging on to a run-away freight engine. The sound was so loud near the stage, and so muddy at the back of the hall, that Lawrence's first exposure to Blues Traveler since the addition of keyboards was rendered moot. Ben Wilson's instrument was buried under the sound of John Popper's harmonica and Chan Kinchla's guitar. However, Brendan Hill remains a rock-solid drummer and bassist Tad Kinchla continues to demonstrate that he was the right choice to replace the late Bobby Sheehan.

During "The Path," Blues Traveler was joined onstage by Victor Wooten, Speech and MC Divinity for an extended, good-natured hip-hop flavored jam.