Eminem cleans up at MTV awards

New York — Eminem won four awards at the MTV Video Music Awards Thursday, but it didn't put the rapper in a good mood ï¿½ he found time to feud with his nemesis Moby, then ended up getting booed by the crowd.

It was just part of the annual celebrity circus that is the Video Music Awards, which featured a typically bizarre appearance from Michael Jackson, a standing ovation for former Mayor Rudolph Giuliani and a Guns 'n Roses performance featuring Axl Rose ï¿½ but apparently none of the other original members such as guitarist Slash. 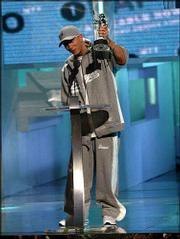 Eminem accepts the award for Best Rap Video of the Year for "Without Me" during the MTV Video Music Awards. The event was Thursday at New York's Radio City Music Hall.

Bruce Springsteen and the E Street Band kicked off the show with a rousing yet poignant performance that celebrated the spirit of the city. Springsteen sang the title cut to his new disc, "The Rising," which touches on the emotions and the aftermath of Sept. 11.

That reverent spirit didn't last for long. At Radio City Music Hall, host Jimmy Fallon lampooned nominees including Eminem, Nelly and teen rocker Avril Lavigne by spoofing their videos. In one of the evening's first surprises, Godfather of Soul James Brown sashayed on stage at the end of Fallon's skit.

Perhaps the biggest surprise was when pop queen Britney Spears emerged to give an "Artist of the Millennium" award to Jackson, whose first album of the new millennium, "Invincible," only garnered two hits and was a commercial disappointment. The award coincided with the King of Pop's 44th birthday.

Eminem provided the evening's biggest shocker ï¿½ he was booed after winning the award for best male video for "Without Me." (He also won video of the year, rap video and direction for the clip, a comic-book style satire).

The tension started when one of his frequent targets, Christina Aguilera, presented the award. Aguilera looked like she wanted to drop it on the floor rather than put it in his hand.

Then he took a pot shot at techno artist Moby, calling the bespectacled artist a girl (Moby irritated Eminem last year by criticizing his lyrics as misogynist).

The boos from the audience began. 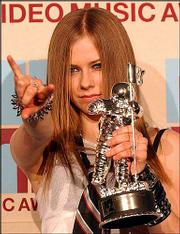 "Yeah, keep booing," Eminem said. Appearing to look in Moby's direction, he added, "I will hit a man with glasses."

The audience later cheered him when he won video of the year.

Despite that excitement, there were plenty of lulls in the program. Scripted banter between presenters like twins Mary-Kate and Ashley Olsen and actress Brittany Murphy fell flat. When the camera panned the audience during some of Fallon's skits, they appeared confused ï¿½ or worse, bored.

Typically, the awards are held after Labor Day. Because of the approaching anniversary of the Sept. 11 terrorist attacks, the network pushed the show up to August. This year's show paid special tribute to the city.

More emotional was MTV's tribute to TLC, who lost their most dynamic member, Lisa "Left Eye" Lopes, in a car crash in Honduras last year.

Of course, there are the awards. Besides Eminem's prizes, Pink, No Doubt and The White Stripes each won two.

There was also the fashion show that the awards bring. Spears arrived in a black leather outfit with a cap that made her look like an auxiliary member of the Village People. Pink looked punk with a short black hair style, tattooed arms and a black-and-green striped dress. A streaky-haired Aguilera donned a halter that barely seemed to cover her. 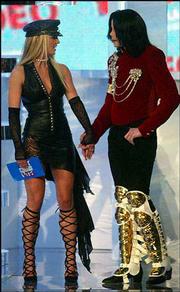 Michael Jackson accepts a special "Artist of the Millennium" award from Britney Spears during the MTV Video Music Awards.