New York — Anyone familiar with Elmo - and who's not? - knows that Elmo loves everyone. He loves his friends of different races and religions and this year he is eager to celebrate the winter holiday with them all.

In the new video "Elmo's World: Happy Holidays!" he learns about Christmas, Hanukkah and Kwanzaa and the similarities and differences among the three.

"They're all about sharing. You should think about others, not just yourself," says Elmo, the famous fuzzy toddler on "Sesame Street."

"And they're not just about the giving of presents, it's also about giving of yourself."

What else do the holidays have in common? Good food, answers Elmo, during a phone interview. "There's a lot of fruitcake and turkey."

He also likes that families come together during the season.

Elmo and his family celebrate Christmas, and in the video he is looking for the perfect present for his goldfish Dorothy. During his search, Elmo encounters Letter Carrier Kelly, played by TV host Kelly Ripa of "Live With Regis and Kelly," who helps explain the customs of each of the holidays.

Teaching children to embrace these holiday traditions that might vary from their own family celebrations is an early and important lesson in tolerance, says Ripa, also interviewed by phone.

"Kids come out with a pure heart," she says. "They don't know about differences - they don't even know about gift-giving - we adults teach them that." 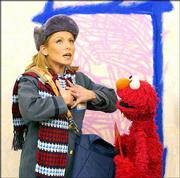 A video such as this also helps spread the word about different cultures to kids who might not see these things in their everyday life, she says, but those same kids grow up to be a part of the increasingly globalized world.

She recalls when she was in elementary school in suburban New Jersey, almost everyone she knew celebrated Christmas, and there was only one Jewish girl in the whole school. Ripa says she never even heard of about Kwanzaa until she was at least a teenager.

Thanks to Elmo, she adds, both she and her children, 5-year-old Michael and 17-month-old daughter Lola Grace, are learning about the generous spirit of all the holidays.

Of course all this good will doesn't mean Elmo doesn't have a Christmas wish list.

"I hope everybody stays healthy," he says.