A long time ago, before Watergate even, a lot of us came into this business looking for the Hollywood version of a newsroom. The kind where the city editor yells across the newsroom telling a reporter to drop everything . . . head for a five-alarm fire . . . stop downstairs at Kelly's Bar and grab a photographer on the way.

Editors hollered. They hollered things like "stop the presses" and "hold page one," or "get in my office." Many kept bottles of whiskey in their desk drawers for just such occasions. It soothed the throat between demands and commands.

Reporters weren't assigned they were ambushed. No emails, no memos in your mail box. Most assignments were verbal surprises.

The whiskey bottles are gone, but the surprises are still around. Few in our newsroom know exactly what they'll be doing a day or two down the road. But, as a tough old editor used to say, "you can't plan but you can be ready."

I was trying wrap up a story on wild horses. A manager with our company stopped by my desk and asked if I'd be interested in photographing KU students for a calendar. He looked pleased with himself. 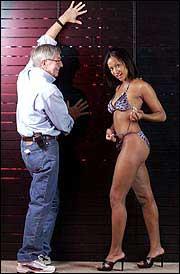 Ashleigh Garcia/Special to the Journal-World

Tips on posing for The Women of KU 2003 calendar were offered to Jessica H. at the beginning of her photo session with Journal-World senior editor Bill Snead. Jessica is a dancer with the Unity Hip-Hop Dance Troop at KU.

Now, you might ask, what in the world does a calendar filled with pictures of college girls in bikinis have to do with the news business.

But, it has a lot to do with KUSports.com, the most popular Web site associated with LJWorld.com, the World Company's main news site. Even without girls in bikinis, KUsports.com serves up nearly 2 million pages a month.

Rob Curley, is the new honcho of LJWorld.com. Slightly famous in the wild world of Web sites, he claimed he'd done his homework and discovered I'd photographed the New York fashion scene when I worked at the Washington Post. And that I'd actually shot swim suit layouts on semi-exotic islands like St. Maarten and Grenada. My job offer from Playboy was the clincher.

He suggested a calendar would look good on my resume. Or at least be a lot of fun.

And we'd have no distractions like warm sandy beaches, palm trees, drinks with little umbrellas or blue water . . . we'd shoot the entire calendar in a Lawrence studio.

Through an ad in the University Daily Kansan, KU's student newspaper, coeds with an interest in calendars were invited to submit resumes and photos. By deadline, 150 girls had applied. Some who didn't have calendars submitted resumes and photos days after the deadline.

80 finalists were interviewed by Curley along with several young women who'd been Decembers or Julys in previous years' "Women of KU" calendars.

For part of my homework I dropped by KU's Student Union for an hour to watch some of the model interviews.

Every 10 or 15 minutes a smiling, brave soul would sit in a chair opposite the necktie and dressed-for-success calendar panel who were armed with questions and yellow legal pads. They cheerfully chatted about their favorite classes, career plans, their availability for personal appearances and what they thought of the calendar in general.

World peace was not on the menu.

All were familiar with last year's calendar produced by another outfit . . . except me.

After a quick digital snapshot of the bikini, a handshake and a "we'll be getting back to you," they left in the general direction of Jayhawk Boulevard towards their pursuit of higher education.

It would take too long to explain exactly why 24 girls were chosen to be photographed for a 12-month calendar. Four -- the Rozman sisters -- would be photographed together but that doesn't explain away the additional nine, although kind heartedness was involved.

Those models whose photos weren't picked for a month would be presented two to a page in the browsing section of the calendar.

At two separate meetings of the final 24, (only one model was a no-show) the girls were asked to practice their pouty, provocative and a look of their choice, in front of mirrors before their photo sessions. Maybe peek at Sports Illustrated's swim suit editions for poses they'd like to try. peruse newsstands.

Former "Women of KU" calendar girls were there to coach them on posing . . . suggesting they make it an "out-of-body" experience, pretending to be someone else as they lure the lens. Swim wear would be furnished but they were encouraged to bring props and outfits of their own.

They looked at videos of last year's photo sessions on a Texas beach.

I hadn't shot serious swim wear photos for several years and was not ready to trust the "riding-a-bike theory." I wanted a pre-game practice session. Four girls volunteered.

It was the beginning of my KU student-calendar education.

I was surprised to find that being in this calendar was a huge deal to these young women. This was not a lark. With only a couple of exceptions, all of the girls arrived with bags of outfits, accessories, ideas . . . either on time or early.

Some actually brought homework to work on while waiting their turn.

We had a big fan to replace the ocean's breeze and colored lights to jazz up the plain backgrounds. Since previous modeling experience was limited we conducted little sessions on tilting and lowering heads, keeping eyelids at half mast and introduced arm positions that sometimes add definition to bust lines. Body lotions were slathered on to catch the highlights, stylists from Headmasters were on hand for custom hairdos and make-up artists dabbed and blended their colors.

Seeing the transformation of the student who arrived for her photo-shoot in sweats and sneakers dragging a duffel bag, to the student/model who stepped in front of the camera was remarkable.

Darcy was my first subject. She had asked to be photographed early because she had a series of exams coming up. One was the LSAT, a prerequisite to getting into law school. She's majoring in economics and business administration and was in last year's "Women of KU" calendar.

She "knows" KU students check out the calendar.

"Last year I was giving a presentation in my marketing class and four guys sitting together started whispering to one another," she recalled. "I could read one guy's lips when he said 'calendar' and I almost lost my train of thought."

I asked if she had anything special pose in mind.

She said she'd like to do a topless shot wearing a pair of shorts she'd brought with "Kansas" screen-printed across the seat . . . "but in good taste . . . you know what I mean?"

Welcome to the world of calendars.

While photographing her from the back in what we thought was an empty building, about 25 soldiers from Fort Leavenworth began clomping down the long stairway leading to our makeshift "studio."

Darcy's eyes got big as baseballs as she crouched around the corner next to the stairway. I convinced the men who'd come half-way down the stairs that our level was closed. They retreated, slowly and unsmiling, back up the stairway craning their necks unsuccessfully to see what my bright lights were pointing at around the corner.

Just another day at the office.

The photo sessions were booked over three separate weekends beginning at 8 a.m.. and ending most nights well after 10 p.m. More were shot on weekdays plus some re-takes were scheduled at odd times.

My tales of long hours behind the lens and dragging lights and cords from room to room got me no sympathy from my newsroom colleagues. I did get offers to carry my camera bags or help plugging in my lights. My wife Dona offered realistic help by having a heating pad ready when I got home.

After we finished a days' shooting session I'd edit the day's take and send them to Curley's crew. Within hours they would be on KUSports.com. for all the world to see.

The first calendar shots appeared October 11. Was anybody looking?

I began getting emails from strangers offering to assist "in any way" with the photography. Some students from far-away universities proposed making the calendar their school project.

The girls, lusting for a month of their own, were checking it out too. Some called asking if they could be re-photographed . . . didn't like their hair.

When they returned with their new-do they would always bring a different, more revealing, "outfit."

One combination of gear we photographed, a little on the provocative side, was suggested by the student. It photographed very well and when we finished I complimented her for suggesting the outfit.

"It was my mother's idea," she said, heading for the dressing room.

I can't imagine that grade point averages or people-compatability was a factor when the "judges" picked the final 24 candidates. All scored high in both categories. Niceness and competitiveness ran rampant. They're responsible citizens . . . nearly all have jobs.

The girls were video taped during the photo sessions, did audio interviews, performed in an MTV-like video and taped radio and television commercials promoting the calendar.

Some of us would like to think there's a type of person who'd compete to be in a swimsuit calendar. I was wrong. Hardly any two of the models were alike

Like Brandy, one of the athletes in the group, hobbling on crutches for her final photo shoot. She just had surgery after wrecking her knee running the Chicago Marathon. Her Iowa high school's valedictorian, she's preparing for medical school.

Or Kimmie, a KU cheerleader who loves to sing, dance, act and cheer . . . especially for an audience.

Denise is a student minister at the St. Lawrence KU Campus Church.

Carey, an exercise science major, appeared in Playboy's "The Girls of the Big 12" published earlier this year.

Ashleigh's grade points are close to 4 and she works a couple of jobs, one as a studio photographer in Overland Park.

Jessica is a member of the Unity Hip-Hop Dance Troop at KU and has a terrible time standing still.

Shannon works hard for her courtside seat at KU's men's basketball games. She's one of the team's student managers.

Meghan is excited about her job at the Boy's and Girl's Club of Lawrence.

So why do they want to be in the calendar?

One wanted to get back at a boyfriend who strayed . . . "show him what he lost." Another wants to follow in her mother's modeling footsteps. For others it offered something "really different."

Some wanted to meet new friends to hang with, in this case the other calendar girls. At gatherings since the photo sessions their bonding is obvious.

For many it was just the challenge. As one freshman said, "I know there are girls on campus a lot cuter than me but I thought it would be good to step-up and take a shot at something like this," she said.