Visions of sugar plums on the prairie

"It was just waiting to happen," says Deborah Bettinger, main choreographer of "A Kansas Nutcracker," which premieres Thursday at the Lawrence Arts Center. "We decided we wouldn't do it until the first of the year in the new building and it would be our premier holiday ballet."

"There are so many more different styles of 'The Nutcracker' than Victorian now," she adds.

Indeed. Dance companies across the country ?" searching for alternatives to the classic Christmas ballet ?" have lured audiences with ethnic, Freudian, jazz, comic book and other creative variations of the time-honored (some would say time-worn) tradition. The Kansas version certainly breaks the 110-year-old mold.

It begins with a barn dance set in Lawrence during the 1850s, Kansas' tumultuous territorial period. Those familiar with the traditional "Nutcracker" will recognize Clara, whose nutcracker turns into a prince in the original production and sends her on a dream odyssey through the lands of snow and sweets.

In the Sunflower State variation, Clara is more concerned with the turbulence of the time than the broken nutcracker that saddened her Victorian counterpart. The dances that take place in her dream represent the ebb and flow of the creatures and culture on the plains. Characters such as snakes, grasshoppers and barn animals are featured.

"Instead of sugar plums, Clara sees herself in 10 years," says Bettinger, who's also artistic director for Lawrence Youth Ballet and Lawrence Ballet Ensemble. 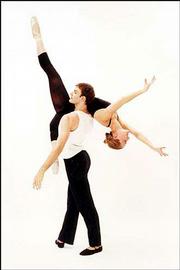 Beau Hancock lifts his partner, Sarah Grunwaldt. Hancock and Grunwaldt dance the parts of the Snow King and Queen in the Lawrence Arts Center's production of "A Kansas Nutcracker." The show premieres at 7:30 p.m. Thursday at the arts center, 940 N.H.

Driving the movement on stage will be a modest, 12-piece orchestra under the direction of Jeff Dearinger, director of the Uptown Mandolin Quartet, who rearranged Tchaikovsky's "Nutcracker" to give it more of a "Kansas" flavor. The three-piece mandolin section adds a folksy air.

"Plectrum instruments were popular at that time," Dearinger says of the 1850s in Kansas. "It sounds as much like the original as I could get with the instrumentation. Some simplification had to be done. Most of it is very true to the original. I would call it a transcription rather than an arrangement."

The size of the ensemble was reduced from the typically grand "Nutcracker" orchestra to economize on-stage space for the dancers and actors - more than 100 people. The thinning means the musicians often work overtime to play more than one part.

"It's very demanding music to play. These guys will get a workout," Bettinger said. "They'll be as tired as the dancers by far."

The dancers include children, adults and professionals - some from the Arts Center's own professional company, The Prairie Wind Dancers - dancing Bettinger and Prairie Wind artistic director Candy Baker's interpretations of the graceful solos, pas de deux and ensemble pieces that have made "The Nutcracker" such a long-standing favorite.

"This is going to have a whole delightful spin to it," Baker said.

A spectacle
One of those spins is that the first act is a play with just a little bit of dancing. Ric Averill, artistic director of the Seem-To-Be Players, the Arts Center's other professional company, wrote the script and is directing the action.

It's Christmas Eve at the Stahlbaum house - just like in the 19th-century Germany of the original "Nutcracker" - only the Stahlbaums are a free state family that has just finished building its barn in the Kaw Valley. They celebrate with a barn-raising/Christmas party where guests include the likes of abolitionist John Brown, temperance women, a Delaware Indian and border ruffians, who crash the party. Clara pays close attention to conversations about weather, crops, mice in the barn, slavery and other conflicts.

"All these things that she captures in her child's mind ... she kind of has this surreal dream in which all the material we find in the first act kind of comes to life in the dream sequences," Averill said.
So in the second act, John Brown, who frightens Clara, becomes the terrifying Mouse King. The Arabian Dance becomes the Dance of the Snakes. A swarm of grasshoppers also dances.

"The climax of the ballet part is in her dream the ruffians come to burn down the barn and she and the toys and mice chase them off," Averill says.

Throughout the production, sets designed by artist Martin Olson are projected to leave more space for dancing. Fabric artist Jennifer Glenn designed the elaborate, colorful costumes worn by the cast of 123.

"It's very much a spectacle," Averill said.

"One of my favorite kinds of theater is that mix of community with professional - all the learning that goes on and the interchange that goes on."
Bettinger agreed.

"The magic really is the marriage of all the talents that have been floating around here for years," she said. "It opens so many more areas of wealth."