At a gala held at the Kennedy Center, they were celebrated along with actress-singer-dancer Chita Rivera and Metropolitan Opera conductor James Levine for their achievements in the performing arts.

Earlier in the evening President Bush toasted the honorees for their contributions to the arts.

"This year we've brought together in one room a legend of Broadway, the conductor of the Met, the composer of 'Mrs. Robinson,' the face of Cleopatra and the voice of Darth Vader," said Bush, addressing the honorees at a White House reception.

"Each one of you is known to the American people in a way that runs deeper than fame."

Following the reception, Bush and the first lady attended the 25th annual program where the careers of this year's honorees were celebrated. 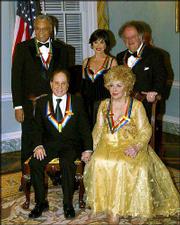 James Earl Jones, Chita Rivera and James Levine, left to right back row, with Paul Simon and Elizabeth Taylor, front row, are this year's Kennedy Center Honorees for their lifetime contributions to the performing arts.

The Kennedy Center's chairman, James A. Johnson, called Taylor "a luminous film actress who for nearly 60 years has been a Hollywood icon treasured by millions throughout the world." More recently, she has helped raise millions of dollars to fight AIDS.

The Kennedy Center said McCartney would be on the 2003 list and that Simon would have been honored in the future.

Simon first became known as part of a duo with Art Garfunkel. "Sound of Silence" and "Bridge Over Troubled Water" were among their most popular numbers.

"More recently, his work has encompassed an awareness of and concern for international art and artists," Johnson said.