Puddle of Mud became the first group to sweep all four rock awards since U2 did it in 1992 by winning artist of the year, top rock track for "Blurry," modern rock artist and modern rock track.

Nickelback picked up four awards, including the hot 100 single of the year for "How You Remind Me." 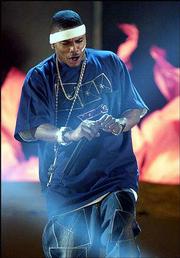 Nelly performs during the show at the MGM Grand Hotel and Casino in Las Vegas. He took home awards in six categories.

The Billboard Awards honor the year's chart-topping artists. Cedric the Entertainer hosted the show, which aired on Fox.

The show at the MGM Grand Garden Arena also scheduled performances by 17-year-old Canadian singer Avril Lavigne, who had one of the year's biggest hits, "Complicated," Faith Hill, Justin Timberlake and Creed.

Aerosmith's Steven Tyler presented Cher with an achievement award, and comedian Chris Tucker presented a special "Thriller" award for Michael Jackson, who did not attend.

The Billboard Awards are determined by the magazine's year-end chart listings, which are based on record sales and airplay. Winners in several categories won't be announced until later this month.