Tolle of The Belles crafts a mellower mood 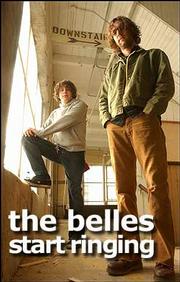 Jake Cardwell (left) and Chris Tolle of The Belles

This may be the year of rock's revival in the national music media, but in Lawrence The Belles have jumped off that bandwagon.

Despite the hype around the so-called "The" bands -- see The Hives, The Strokes, The White Stripes and The Vines, whom many music mags credit for reviving rock -- The Belles' new album "Omerta" is in a decidedly mellower mood.

Belles songwriter Chris Tolle claims he's maintained a stockpile of songs in the lower-fi vein of "Omerta" for some time, but they weren't working in the fuller rock framework of his other band, The Creature Comforts.

"I always wanted to do something with them," Tolle says. "But I just thought those would sorta remain 'those side things' and eventually somewhere from my eulogy would be this stack of tapes: 'Here's the real Chris.'"

Instead, the rock became a side thing (as Tolle confirms, Creature Comforts are "on hiatus" ), and Tolle hooked up with ex-Reflector drummer Jake Cardwell to craft The Belles' stripped-down tunes.

"Jake and I could have put these ideas to work and tried to force them into any of the situations we've been in," he says.

"But you just have to sorta step away and start new and say, 'OK, here are the boundaries -- they're way out here.' You know, instead of just looking at what boundaries time has squeezed you into."

As their own lore goes, The Belles' project began atop bars stools between cigarettes when Tolle told Cardwell that he'd recorded some of his songs that never clicked with Creature Comforts.

"I bugged him about bringing the tape," Cardwell remembers. "I was initially just stoked to get the songs -- not necessarily thinking too much about playing them."

That was a year ago. In the months to come, Tolle and Cardwell would get together on Tuesdays if they felt like it to work up a song or two.

"Eventually we demoed two songs at a time," Tolle says. "I just wanted to do something really lo-fi, really simple songs, nothing too complicated. They weren't over-thought so they certainly shouldn't be overplayed or over-recorded.

"We just went with a real natural approach to it. There's lots of drum tracks and acoustic guitar on the same track, which is not ideal, but that's how we started playing."

So they carried it over to "Omerta." He said the album itself happened as casually as The Belle's first sessions.

Once they had four songs worked up, the duo burned several dozen demo CDs for people, one of whom was a friend of Cardwell's in Los Angeles.

That particular CD got passed around and, while Creature Comforts were on tour in September, Tolle got word that Lakeshore Records in Hollywood was interested in recording The Belles.

"We wanted to make a record eventually, when and if the opportunity presented itself," Tolle says. "We just didn't think it would so quickly after making four songs.

"We had sorta planned on making four songs, doing another set of four and then doing another set of however many. Just do them on cassettes and hand them out to friends, maybe play places like Louise's or the Taproom. It just kinda snowballed without even trying really. It was a very innocent and pure beginning."

The album will be available in stores Jan. 14 or at their shows. Tonight's performance with The Get Up Kids is only The Belles' second in Lawrence.

Joining Tolle and Cardwell on stage will be Andrew Ashby of The String and Return on guitar and vocals, Ehren Starks of The Gadjits on keys and Creature Comforts bassist Brian Everard. Ashby and Everard were on The Belles first tour of a dozen shows this fall, including a stop in New York at the CMJ Music Marathon.

GETTiNG THE ROCK OUT
Although The Creature Comforts are on hold while Tolle concentrates on The Belles, he emphasizes they were making it a point NOT to break up.

"If we decide to play a show, it's not going to be some reunion show," he says.

"Regardless of The Belles, Ultimate Fakebook or anything else, The Creature Comforts were ready for a bit of a break," Tolle says. "Basically we're keeping the rock stuff saved -- although there is rock stuff that we do, it's just a different kind of rock."

For his part, Cardwell will continue with Safety in Numbers, a side-project of Hot Rod Circuit's Andy Jackson.

"It gets the rock out since we're doing so much mellow stuff. I personally need to play some loud rock and roll every once in a while. I'm glad I don't do that all the time, though, because I get real sweaty,"

Puts in Tolle: "Yeah, we don't get too sweaty."

-- Online entertainment editor Phil Cauthon can be reached at 832-7149.