The French capital has always wooed visitors with its reputation for fine dining and high fashion and Paris continually cashes in on its mystique as the city of romance. Now it has a new strategy: selling Paris as a leading destination for gay travelers.

"We want to create a gay-friendly spirit across the whole city," said Laurent Queige, a city official who is one of the project's organizers. "It's an entire marketing campaign devoted to gay tourism: promotions, brochures, media trips, Web sites, tour packages."

And where better to start than with Americans, who have a long love affair with Paris as well as a large gay community. The city treated journalists from gay publications in the United States to an expense-paid trip to Paris this week.

Such a campaign would hardly seem necessary in a city that prides itself on its reputation for sexual license, but officials say that permissiveness doesn't always extend to gays.

Mayor Bertrand Delanoe, who is gay, couldn't attend a meeting last month to inaugurate the gay-friendly tourism campaign because he was recuperating from a stabbing attack by a man who said he disliked homosexuals.

The overall challenge for officials working on the campaign is to tweak the image of a city famous for photographs like the 1950 Robert Doisneau snapshot of a man and woman stealing a kiss - incidentally in front of City Hall.

Travel agents who cater to gay clients are planning package tours to coincide with summer festivals like Gay Pride parade, which last June drew a record half-million people. Ideas also include discount tours geared to the nightclub scene and other Paris in-spots.

As part of the special attention to Americans, an outdated guide called Gay Friendly France is being revamped for circulation at French tourism offices in the United States as of June 2003. The Maison de la France in Los Angeles is working with American tour operators and helped organize this week's junket. 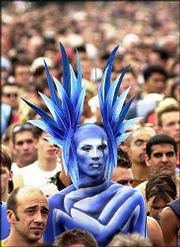 A demonstrator dressed as a blue angel takes part in the annual gay pride parade in Paris in this June 29 photo. Paris tourism officials are trying to sell the city as a leading destination for gay travelers.

Paris is not the first European capital to target the gay tourist. Berlin, London and Lisbon among others have geared marketing toward gay and lesbian visitors, particularly in the United States, for years.

"We're not doing it discreetly," said Natascha Kompatzki, a spokeswoman for Berlin's tourist office, adding that gays are "an important group" for the German capital. Berlin's mayor, Klaus Wowereit, is openly gay and marched in Berlin's Gay Pride parade this year.

London and Berlin, like Paris, have prominent gay districts, which are featured on their tourism Web sites along with listings for gay-friendly hotels and restaurants.

But those cities have a natural advantage, said Remi Calmon, a spokesman for France's 600-member National Union of Gay Businesses.

"The French are not always - how shall I say this - the nicest people," said Calmon, whose group is part of Paris' gay-friendly planning committee. "It's one thing to bring tourists here, but when they arrive you can't take an attitude with them."

One idea that has prompted great interest was dreamed up in the small Loire Valley city of Le Mans, best known for its 24-hour auto race.

On its own mission to attract gay tourism, Le Mans City Hall has drafted a "Lesbian and Gay Friendly Welcome Charter," which they mailed to local merchants this fall.

Membership is optional, and so far 37 establishments have signed up - including restaurants, bars, travel agencies, a body piercer and all the city's hotels.

Signatories paste rainbow-colored stickers in their windows with the message "Welcome to Mans" and a smiley face to let customers know they are gay friendly.

Supporters say the rainbow smiley face sends a message of tolerance. But others questioned the tactic as being perhaps a little too politically correct.

"A welcome sign for homosexuals?" said Tony Guimier, whose menswear shop in the city's historical center opted not to adopt the charter. "Do they also want me to put up a sign saying I accept Arabs, blacks and Jews?"