According to police and witnesses, Moby, whose real name is Richard M. Melville, was approached by the men about 1 a.m. Thursday outside the Paradise Rock Club. One of the men punched Moby, 37, in the back of the head and on the right side of his face, breaking the singer's glasses and cutting and bruising his face.

When two club security guards tried to stop the attack, the assailants sprayed a macelike substance at Moby, Moby's manager and the guards, then fled, police said.

The assailants said nothing during the attack, and the motive was unknown, Paradise manager Jeff Marshall said.

During the concert, Moby, a self-described pacifist, had spoken out against aggression and violence. 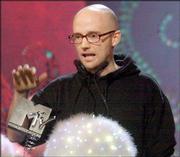 Techno artist Moby accepts his Best Web Award at the MTV European Music Awards in Barcelona, Spain, in this Nov. 14 photo. Moby was attacked Thursday by two men while signing autographs outside a Boston nightclub.

He wrote on his Web site that he was not angry about the attack, just mystified. He has asked the attackers to post an explanation.

"And if anyone sees me in the next couple of weeks and I have some big bruises or stitches on my face, well at least you know why," Moby wrote.

Moby is electronic music's first bona fide superstar. His 1999 album, "Play," sold 10 million copies. For the past two years, the Connecticut native has headlined a touring festival that has featured guests such as David Bowie.