Author gets back to New Jersey roots

By By Elizabeth A. Kennedy, Associated Press

TRENTON, N.J. — Janet Evanovich is a Jersey girl and proud of it.

Born and raised in the Garden State, she set her nine best-selling crime novels in Trenton and patterned the star of her books after a New Jersey stereotype: Bounty hunter Stephanie Plum is a tough-talking, Spandex-wearing mall rat with big hair.

"There's a reason for stereotypes, because there's usually some truth in them," Evanovich said. "And I think there's a lot of me in Stephanie."

Although Evanovich never tracked down criminals who skipped bail or got beaten up by a purse-wielding little old lady, she, like her star, grew up in a working-class family and graduated from Rutgers University with honors.

But while Stephanie Plum lives in Trenton's Chambersburg section - affectionately known as the 'Burg - the author has long since left her native state for rural New Hampshire.

"I'm still a Jersey girl, though," Evanovich said. "Everything I learned about life and love and kids I learned at my Aunt Lena's kitchen table in South River."

Since the first Plum novel, "One for the Money," debuted in 1994, Evanovich has brought welcome publicity to the troubled capital city.

Trenton becomes something of a ghost town at night and on weekends, when the 20,000 state employees leave for the suburbs at the end of their shifts. And the anthrax mailings with Trenton postmarks last fall didn't help the struggling city establish a tourism-friendly reputation.

At a recent book signing, however, thousands of fans - Evanovich calls them "Plum Crazies" - turned out. Even Mayor Douglas Palmer came.

Palmer is a fan of the series, and even asked Evanovich to make him governor in the next installment. He also said he's not offended that Evanovich made real-life Trenton police officer Joe Juniak mayor in her last book.

The Plum novels, which have sold more than 10 million copies worldwide, put a small-town face on Trenton. Although crime abounds in Stephanie Plum's neighborhood, the criminals are usually townies with good hearts. In Evanovich's latest book, "Visions of Sugar Plums," bail-skipper Sandy Claws, who is wanted for burglary, runs a mysterious Trenton toy factory with a troupe of elves. 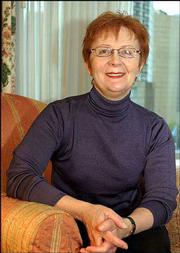 Janet Evanovich poses for a portrait in Philadelphia. Evanovich has become a best-selling author with her mystery series about 30-something, tough-talking bounty hunter Stephanie Plum, set in Trenton's Chambersburg section.

Evanovich said she has no plans to write about the grit and gore of real-life murder. "These are happy books," she says, "with the good types of dysfunction."

The author got to know Trenton about 10 years ago when her parents, who had moved to nearby Mercerville, checked into St. Francis Medical Center when they were sick.

"I would go for walks in the 'Burg," she said. "And I'd snoop in people's windows because they all leave their windows open."

The area reminded Evanovich of her favorite parts of South River when she was growing up: families lounged on their stoops, and there were plenty of good Italian restaurants and bakeries on every corner.

Evanovich concedes that the mystery and crime aspects of her novels are largely incidental and pleasantly silly - the books are about family, friends and the neighborhood.

Stephanie Plum has an overbearing mother, a grandmother with scads of boyfriends, a perfect sister named Valerie and a beefy boyfriend who is also a Trenton police officer. And they all live in the 'Burg.

"I really know this neighborhood," she said. "The people in the world of Plum are so closely related to the way that I grew up and my neighbors."

Evanovich, 59, hasn't lived in New Jersey since her early 20s. She and her husband, Peter, moved around as he got various teaching jobs in Pennsylvania, Alaska and Virginia. She decided she wanted to write when she was in her 30s and spent about 10 years writing 12 romance novels under the pen name Steffi Hall. "I did those little books you buy at the supermarket," she says.

The Evanovich family moved to Hanover, N.H., about eight years ago because it's a quiet place to write and run the business, she said. "If you put me next to a mall, I'm shopping - I'm not writing. I'm going to be in the shoe department at Macy's. So it's nice and quiet in New Hampshire."

Evanovich describes her writing career as a family business. Her husband, who has a doctorate in mathematics, is the general manager; son Peter, 32, is the financial manager; and daughter Alexandra, 30, maintains the Web site.

And she will keep writing as long as she has fun. But she doesn't anticipate ever running out of ideas for Stephanie Plum.

"I have tons and tons of ideas; that's the easy part," she said. "There are more ideas rattling around in my head than I could possibly get out."