By By Lorenza Munoz and Susan King - Los Angeles Times

Hollywood, Calif. — The brassy old-fashioned musical "Chicago" and the literary drama "The Hours" earned the most Golden Globe nominations Thursday, marking them as early favorites for Oscar contention, with the long-delayed, extravagant Martin Scorsese 19th-century epic "Gangs of New York" close behind.

Apparently rebounding after a slow award season last year, Miramax dominated this year's Globe nominations, garnering the most of any studio with eight for "Chicago" and five for "Gangs of New York." In addition, "The Hours," a Paramount/Miramax co-production, received seven nominations from the Hollywood Foreign Press Assn., including one for best picture-drama and two for best actress-drama for Meryl Streep and Nicole Kidman.

The Globe nominations, which are seen as fairly reliable indicators of Academy Award bids (the Oscar nominations will be announced Feb. 11), turned out to be good news for such films as "My Big Fat Greek Wedding" "About Schmidt," "Adaptation" "The Pianist" and "About a Boy," as well as for Diane Lane, a best actress nominee for "Unfaithful," and Goldie Hawn, a surprise best actress nominee for "The Banger Sisters." The 60th annual Globe awards will be given out Jan. 19 and will air on NBC.

Not faring well were two DreamWorks films, "The Road to Perdition" and "Catch Me If You Can," both of which received one nomination each. "Far From Heaven," a critical favorite and winner of the New York Film Critics Circle award, failed to get a best picture nomination, although its stars, Julianne Moore and Dennis Quaid, were both nominated.

"Chicago" cast members were still recuperating Thursday morning from their glitzy New York premiere the night before when they started getting congratulatory calls about the nominations. 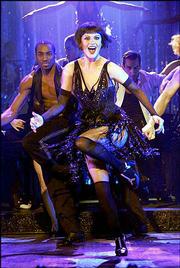 In the best actress-drama category, both Kidman -- playing the English novelist Virginia Woolf -- and Streep as a modern-day Clarissa Dalloway were nominated for "The Hours."

Nia Vardalos, who was nominated for best actress in a musical or comedy for her starring role in "My Big Fat Greek Wedding," said she was overwhelmed by the nomination and the success of the film.

"People ask me if I'm living my dream," she said Thursday. "I never even dared to dream something like this."

The Globes are also given out for TV, and once again HBO dominated the main categories. The pay-TV service, which at the last ceremony swept the two main TV categories -- comedy and drama series -- with "Sex and the City" and "Six Feet Under," garnered 26 nominations this year, twice as many as its nearest competitor, NBC.

That included repeat nominations for "Sex and the City" and "Six Feet Under," nods to "The Sopranos" and "Curb Your Enthusiasm," and continued dominance in the area of made-for-TV movies.