Fonda, who was observing her 65th birthday, passed through a West Bank crossing point of Qalandiya, trudging through mud and clutching a bouquet of red roses given to her by a Palestinian women's group. 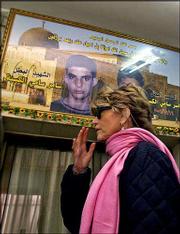 Actress Jane Fonda arrives for a visit at the family house of Fatima Kusibeh, who lost two of her children during the ongoing Mideast conflict, in the West Bank. Fonda, is on a three-day trip to the region. The frame on the wall shows the two dead sons of the Kusibeh family.

She toured West Bank villages and nearby Jewish settlements and was led through a Palestinian refugee camp near Ramallah in a daylong tour by the Jerusalem Center for Women.

It was the final visit of a trip organized by a global movement to stop violence against women. The movement, called V-Day, was inspired by the off-Broadway hit "The Vagina Monologues" and its playwright, Eve Ensler. Ensler accompanied Fonda and led discussions with Palestinian women.

"This is the focal point of so many conflicts," Fonda said. "Both sides aren't hearing each other's narratives, and maybe that's our role as artists."

In an emotional moment, Fonda and Ensler met with Fatima al-Kasba, 37. Kasba said her sons, Yasser, 12, and Samer, 15, were killed a little over a month apart by Israeli soldiers. Fonda embraced Kasba, with both women in tears.

Fonda, a two-time Oscar winner and fitness guru, said she had been to Israel and the West Bank in 1980, but what she saw today was dramatically different. She said she was most surprised by the number and proximity of Jewish settlements to the Palestinian population.