Barbie's oldest friend, Midge, is pregnant, and Wal-Mart has pulled her from store shelves, reports The Philadelphia Inquirer.

Following complaints from customers, the retail giant has stopped selling "Happy Family" Midge. When Midge's belly, attached by a magnet, is opened, a curled-up baby pops out. Midge and her baby retail for about $20. Her husband and 3-year-old son are sold separately. 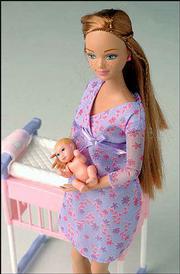 "Customers had a concern about having a pregnant doll," Wal-Mart spokeswoman Cynthia Illick said. The toy's maker, Mattel, could not be reached for comment.

Introduced in 1963, Midge was the first of many friends and family members for Barbie, who was created four years earlier and has been one of the world's top-selling dolls since.

Customers in Philadelphia-area toy stores had differing reactions to the doll. At a KB Toys store in Roosevelt Mall, a manager said he had heard only positive responses. But at KB Toys in downtown Philadelphia, customer reaction was uniformly negative.

"Most girls want to be like Barbie" or her friends, said Kenya Williams, 29, whose daughters are 9 and 7. "Maybe if they would have put them all together as a family, it might be a little different, but alone it sends out the wrong message."