Author Alice Walker credits two of her brothers for helping her develop her creative writing process ï¿½ not because they were encouraging, but because they would not allow her to keep the pieces she had written.

The result is that she never writes drafts for her short stories, essays, novels and poetry. She keeps the words safe in her head. 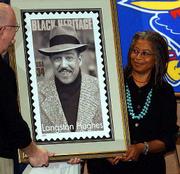 "I grew up with five brothers, and only one was decent to me," she said. "ï¿½ I learned to write things in my mind. I write lots mentally ï¿½ before I go to pen and paper or the typewriter."

Walker, who was born in 1944 to sharecropper parents in Georgia, is in Lawrence as part of the Langston Hughes symposium at Kansas University. She spoke Thursday night at the Lied Center, drawing a crowd of about 1,700 people.

Walker was catapulted into the public arena in 1983 when her novel "The Color Purple" won the Pulitzer Prize and was made, two years later, into a movie starring Whoopi Goldberg, Danny Glover and Oprah Winfrey. In addition to being a prolific writer, Walker also is an outspoken activist on such issues as female genital mutilation, apartheid and the Cuban embargo.

The war on terrorism is heavy on her mind now. She's concerned that Osama bin Laden's boast of making the United States a shadow of itself might come true, citing the government's rechanneling of domestic resources to support military actions.

"We are in the most danger we've ever been in," Walker said. "There's no way to stop terrorism until we study the causes ï¿½ the anger, the despair. ï¿½ We can only be safe if our neighbors are safe. In a climate like the one we're in, some (people) feel like they have to be so patriotic that they can't speak from a place of tenderness."

Walker said she met Langston Hughes when she was a student at Sarah Lawrence College in New York because Hughes had decided to publish one of her short stories. He was in his 60s; she was 19 or 20.

She had to admit to Hughes that she had never read any of his works. Instead of scowling at her, Hughes reached into a cabinet, pulled out a stack of about 10 books and sent them home with her.

"I read Langston Hughes for the next five years," she said.

Walker said she was lucky enough to marry a Jewish man who was a bigger fan of Hughes than she was. For a time the couple lived in Mississippi, where interracial marriages were against the law. When racist violence reared its head, they would console each other by reading from Hughes' works. Walker's favorites are Hughes' autobiographies, "I Wonder as I Wander" and "The Big Sea."

Walker said Hughes' writings reassured her of the goodness and kindness in the world and that everyone has the right and responsibility to enjoy life.

"He was an alert, wise spirit with a lot to teach us," she said.