Langston Hughes' poems and short stories have inspired a group of Douglas County artists to create an exhibition of paintings, collages, prints and sculptures.

"Dream Variations: Art Inspired by the Work of Langston Hughes" opened Friday and will continue through March 10 at the Lawrence Arts Center, 200 W. Ninth St.

The exhibit is the brainchild of Brigid Murphy, an art teacher at Langston Hughes School, who sent letters to 40 area artists asking if they would be willing to contribute to the show. Thirty-two artists jumped at the chance.

"Before we sent the letter, almost all of the artists had never read Langston Hughes," said Sally Piller, a Lawrence artist who is helping to coordinate the show. 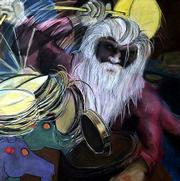 "One Christmas Eve" from "The Way of White Folks":

"But I seed Santa Claus in there," little Joe said, "so I went in."

"Huh! That wasn't no Santa Claus," Arcie explained. "If it was, he wouldn't a-treated you like that. That's theatre for white folks ï¿½ I told you once ï¿½ and just a old white man."

"We got people to pick up a book and get turned on by his writing," Murphy said.

Below is a sampling of the artworks in the show and the poems or short stories that inspired them. 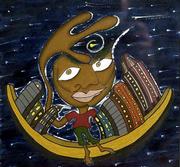 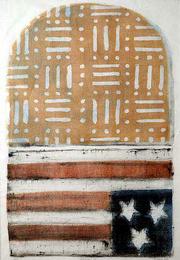 "Cross," a monotype on mulberry paper by Marty Olson.

"Walls," an acrylic on paper by Brigid Murphy.

"As I Grew Older #1," a woodblock monoprint made by 18 apprentice-artists in Van Go's JAMS program.