New York — It's called a Time Machine, and the television industry only wishes it was as benign as the device that sent Michael J. Fox back to the future. Instead, the new box that can warp TV time is making many people grumble, while others see only dollar signs.

Invented by Bill Hendershot, an engineer from San Jose, Calif., the Time Machine enables television stations to compress their programs to fit in more commercials. 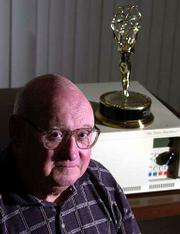 Bill Hendershot is the inventor of television's Time Machine. The machine, shown behind him, condenses television shows and movies into shorter running times to create space for more commercials without altering the shows' content. The Emmy statue on top was awarded to Hendershot in 1974 for developing equipment that improved digital video technique.

It works by going through these programs frame-by-frame, and when two identical frames appear side-by-side, one is removed. Usually, this can be done enough in a 22-minute program (the actual length of most sitcoms without commercials), to add 30 seconds of time.

Viewers are none the wiser, said Hendershot, president of Prime Image Inc.

"It is so good, that you can take the original artists and directors who made the piece and they cannot tell the difference," he said.

He's sold about 100 Time Machines to television stations across the United States. They cost $93,000 each. If a station uses it two or three times a day ï¿½ Hendershot warns against overuse ï¿½ the machine would pay for itself through additional advertising revenue in two months, he said.

"There's never, ever been a single unit returned, not for any reason," he said.

The Time Machine's existence might have gone unnoticed by the public at large if it hadn't been for a reporter who was covering a Pittsburgh Steelers football game last October. He noticed that the game in front of him on the field didn't match the game being broadcast on KDKA, the CBS-owned television station.

KDKA got in trouble with CBS network executives, since the National Football League limits the number of commercials that can be shown during their games.

Beyond that, the Time Machine has so troubled the American Association of Advertising Agencies that it has started an investigation into how widely it's being used.

If stations can use the Time Machine to compress the programs, they could shorten the commercials, too, said Kathy Crawford, executive vice president of the ad firm Initiative Media. Advertisers that pay for a 30-second commercial better be getting 30 seconds, not 29, she said. Hendershot said stations don't use the machine to cut commercials.

Advertisers are also concerned that the Time Machine adds to the clutter on television. They're already worried about additional commercial time added over the past decade by networks; the more commercials there are, the smaller the chance that one will stand out.

"It may mean that there is going to be less use of television and more use of other media" by advertisers, Crawford said. "What television has done to itself suggests it is losing value."

CBS has been quietly discouraging its stations from using the Time Machine, and the public spotlight may scare some station managers away.

Tricks of the trade

Hendershot said that he doesn't understand the problem.

The machine's very nature subtly tricks viewers about what they're seeing. But Hendershot said that deception isn't nearly as bad as television stations chopping scenes out of movies to fit in more ad time, or artificially coloring a previously black-and-white film.

The machine has other uses that have not been fully explored, he said.

For example, major advertisers have long sought to be able to run a commercial simultaneously on all of a TV market's broadcast outlets, so viewers would see the same thing if they tried to click away from an ad. Advertisers have tried this before, but stations have never been able to coordinate the time precisely to make the ads effective.

Use the Time Machine, and that would be no problem. Hendershot said there have been some big advertisers that are considering paying to outfit TV stations with Time Machines just to arrange simultaneous ads.

"This is a commercial industry," he said. "The reason you get to see free television in this country is because somebody is paying for it."