Drama spills out of cinema

Cairo, Egypt — Some see Inas el-Degheidi as a feminist fighting through her films for the rights of Egyptian women. Others argue that Egypt's most famous female director gets attention the easy way ï¿½ by filming cheap sex scenes. Islamic militants simply think el-Degheidi should be dead, police say.

As one of the first, and the few, women to have invaded what is a male-dominated career, el-Degheidi is used to controversy. 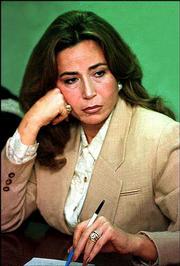 "I was the first to tackle subjects that were banned in the cinema, so they shock people. Maybe in the future people will say, 'This woman was courageous,"' el-Degheidi said in an interview.

Of militants, she said, "They say I've crossed the red lines in art, and I say art knows no red lines."

Late last year, police said a group of Islamic militants plotted to kill el-Degheidi. The group's other targets, according to police and prosecutors, included President Hosni Mubarak and Mohammed Sayed Tantawi, the government-appointed head of Al-Azhar mosque and university, one of Islam's oldest and most prominent institutions.

"I did not take it seriously at first, and to be honest I felt happy for a moment on hearing the news, because they put my name among those of very important people and saw me as someone who can change history," el-Degheidi said.

A police offer to assign her guards convinced the director the threat was serious. She says she refuses to knuckle under to extremists or live in fear ï¿½ she refused the guards.

"Our traditions, customs and maybe our religion ï¿½ though it gave women a lot ï¿½ didn't make women equals of men in many aspects. ... I am not convinced of this. I can't be a follower," she said.

Her movies have covered such subjects as prostitution and selling girls into marriage. One movie, "Disco, Disco," tackled the educational system, drugs, homosexuality and extremism among youth.

El-Degheidi studied at Egypt's Cinema Institute. Since her debut as a director in 1984, she has directed 13 movies and won a number of prizes at home and abroad.

She caught the attention of critics and viewers alike with her earlier movies, widely seen as both daring and important.

Many argue, however, that in her later work el-Degheidi has compromised art for commercialism, relying on scenes of scantily dressed, sultry women and sexually loaded conversations in movies that had poor, or no, story lines.

El-Degheidi said that in life and in her movies, sex is "a main drive" of people's behavior.

She argued that society accepts sex scenes from male directors but expects her, as a woman, to shy away from them.

Well-known Egyptian critic Ali Abu Shadi said el-Degheidi is attacked because she's trying to change backward traditions. He said she could be even more daring; for example, she tries to give her films moral endings so as not to provoke people, he said.

Word of mouth about El-Degheidi's latest movie caused a stir even before its release in January.

"Memoirs of a Teen-Age Girl," which el-Degheidi directed, wrote and produced, examines virginity and premarital pregnancy through the story of a girl caught between her conservative upbringing and a world of dreams where she meets her Prince Charming.

El-Degheidi stormed out of a recent discussion of the movie after she came under fire from viewers who argued that it presents Egyptian girls in a bad light and promotes immoral behavior.

She said she was exploring the dilemma of girls "who are victims of a society that lives with two personalities: You can do anything wrong as long as it's not in public."

Those who criticized the movie are people who "took it in a Taliban-like way," she said.