By By Meghan Bainum

Jaqie Braden is sick and tired of piercing noses. And ï¿½ at least for a while ï¿½ there's been almost nothing else for the Skin Illustrations employee to do.

"It's what they picked, and everybody started," Braden says, "'OK, I'll do that, because everybody is doing it now.'"

From the looks of Lawrence these days, almost everybody IS doing it. In fact, there are so many pierced noses running around town, a new trend in body art seems inevitable. After all, nose rings won't be in forever, and Braden knows this.

She also knows the next big thing to pierce, or ï¿½ well ï¿½ things.

"Nipples," she deadpans. "A lot of the jock guys are getting it done now."

Whether Braden is laughing at the thought of a nipple-piercing craze or because ï¿½ to some ï¿½ any body modification is now considered passï¿½, is not known, but she's certainly amused by body art's steady turn toward social acceptability. Braden had her nipples pierced years ago ï¿½ though she doesn't have them in any longer. She also had her tongue and navel done before it was popular, only to see both trends become immortalized in repetitive, teeny-bopper MTV videos. 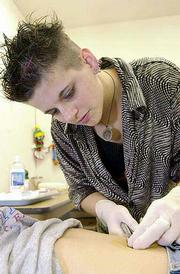 Jaqie Braden, a piercer for Skin Illustrations, 1530 W. Sixth, installs a navel ring on a customer. Braden's job entails piercing everything from the ears to the unmentionables.

As a person, Braden's over it; As a piercer, she's bored.

"I like to do the original stuff, you know, get creative," she says.

"It's more fun for me ï¿½ it's a challenge. I have to sit there and take my time instead of wham, bam, thank you ma'am, and they go out the door."

In an era where noses are so-last-year, nipples are next and tattoos are everywhere, it's hard to get creative without entering the realm of the extreme. After all, when half the youth population already looks like extras from the set of "Mad Max: Beyond Thunderdome," a nose ring or butterfly tattoo doesn't turn many heads. Those seeking to leave the herd have to think big: implants, stretching, scarring and full-body tattoos ï¿½ sometimes on the eyelids and tongue.

Not even genital piercings are considered "extreme" anymore, according to Skin Illustrations owner "Uncle" Russell Bishop. Not anywhere but the Midwest, that is. In fact, even "radical" body art like stretching ï¿½ which is basically making a piercing larger by either inserting a large metal stud or removing a circular section of skin and then inserting an even larger metal stud ï¿½ is common in other parts of America. At Bishop's shop in Arizona, people are stretching their piercings to fit 1/4 inch and 3/8 inch plugs ï¿½ holes about the size of a penny. And that work isn't performed solely on ears or tongues, either.

"They're stretching their genital piercings in other areas to fairly large ï¿½ I mean 10 and bigger ï¿½ in the vagina and penis both, you know. And they put padlocks in it, things like that," Bishop explains. "Very extreme, especially for the Midwest. We don't see it. It's not in the open here, anyway."

He adds that even "normal" stretching of areas like the ears is done on a milder level in Lawrence than many other places. As he talks, Bishop reaches up and tugs on one of his stretched-ear piercings to illustrate his point. One of his lobes has an eight-gauge crevice, the other a two. Most standard piercings in Lawrence consist of a 14 gauge hole, about the diameter of pencil lead. (Smaller numbers mean bigger holes.)

"A 10 gauge is big around here," Bishop smiles. "Most of the rest of America, 10 gauge is nothing. They're piercing immediately at 10 and stretching up from there. Here we pierce at 14 and stretch up to 10 and think we've done something."

Implants ï¿½ where the skull's epidermal layer is slit and pieces of surgical steel or coral are cemented under the skin and sometimes screwed into the bone ï¿½ may be a fairly regular sight in Arizona, but not in the Sunflower State. Kansas law doesn't sanction implanting, and Bishop is forced to send interested parties west. Not that there has been much interest in Kansas for the spiked skull implants ... yet.

"It's really not like running a needle in something, it's a surgical procedure," he says.

Scarification, which involves scarring the skin with a tattoo needle or scalpel, or by branding with heat, causing a permanent raised scar is another form of extreme body art that's gaining popularity. And while Bishop hopes scarification will become more public, he estimates that Lawrence is at least 10 years behind the coasts in body art. Still, the procedure is offered at Skin Illustrations ï¿½ though it isn't advertised.

Compared with scarification and stretching, tattoos may seem fairly tame. Regardless, more and more people are riding the ink-train straight to their local parlors. And while many are quite happy with pre-drawn "flash art" taken straight off the wall, most true flesh-etching enthusiasts take pains to ensure the individuality of their permanent expression by looking for an artist to customize their tattoo.

One such artist is Shane Hart, who runs a popular Lawrence parlor that bears his name. Hart can't understand why someone getting a tattoo would want anything less than a completely original design.

Though Hart does plenty of custom work, he says it's fairly easy to see tattoo trends come and go. A few years ago, old standbys like hearts and anchors brought in a steady stream of ink junkies. These days, Hart's doing a lot of tribal art ï¿½ bold, black lines arranged into serious-looking patterns.

"Probably mid-late '90s people started going back to kind of wacked-out graffiti-looking stuff, and then kind of more of an interest in the traditional stuff," he recalls. "Kind of neat looking stuff, but a lot of times people are doing it with a new twist. There's also like the really wacked out ï¿½ like the graffiti. People are taking that to the extremes too, you know, getting like a big spark plug or monkey wrench all twisted up, chromed out looking ... It's getting kind of silly."

And, although he's known for being pretty creative, even a tat veteran like Hart has his boundaries.

"Just real negative stuff; I don't care for that," he explains. "I mean like your demons, monsters, ghoulies ï¿½ whatever, that's cool. But you know if somebody was like, 'I want 666 on my forehead,' then I don't do stuff like that."

Also off-limits for Hart is graphic pornography, which he gladly eschews in favor of fine art.

Hart also refuses to work on certain areas of the body ï¿½ like the throat ï¿½ that are difficult to tattoo properly and take time to heal. But this is just a personal preference. Basically, it is pretty safe to tattoo just about anywhere that one dares.

"The thing is, the tattoo, it's an open wound for a while, so it's like any open wound," he says. "So if you had something in your ... you know, lower crotch region or something like that, it's going to usually be warm, moist, whatever, and that's perfect breeding ground for bacteria. So you really have to keep them clean and be sure that you take good care of them."

Needless to say, any body modification can be hazardous ï¿½ the more extreme, the higher the risk. Having a friend stick a safety pin through one's ear is chancy, having a buddy insert a metal spike into one's skull is pure madness. Bishop remembers a man who came in to show off his new, homemade brand ï¿½ a huge "S" on his leg that was burned so deeply it damaged the muscle.

"They just simply made a branding iron and branded him like a cow, just burned it into him. He withstood all that pain, and it damn near crippled him," Hart says, shaking his head. "He ended up in the hospital over this huge, ugly brand on him. That's not branding! In branding what we do is use little bitty, tiny pieces of metal or paper clips, we get them just white-hot, then we brand small marks in the form of a pattern so they're more delicate. They're not just like a cow. It's a lot different."

Also, while earrings and nose rings can be removed and forgotten, a scar, tattoo or stretched piercing can be decidedly more permanent. But "normal" piercings can be as individual and unique as "extreme" body art, says Bishop, who gripes about customers who don't get their bodies modified for the right reasons.

"Most of the people that came in here getting tongue piercings didn't understand what the tongue piercing was even for. They didn't give a damn," he says. "That tongue ring is used to enhance sexual pleasure. If you can learn to manipulate it correctly, you can give a guy a lot of pleasure or a woman partner a lot of pleasure. It is like a musical instrument: Some can play it, some can't. And those who can't should leave it the (expletive) alone, plain and simple."

As Jaqie Braden looks around Skin Illustration's bustling waiting-room, the nose-weary piercer makes a plea that might be aimed at the browsing customers, but might also be directed toward Lawrence as a whole.

"Get creative, people," she exclaims. "Make me interested in doing my job!"