U2 arrives in New York in this Sept. 6, 2001, file photo. From left are Adam Clayton, Bono, Larry Mullen Jr., and The Edge. U2 received a leading eight Grammy nominations Friday.

"I don't know what to do," said India.Arie, who helped announce the nominations. "My spirit is flying and I want to jump and shout."

The numerous nominations were surprising because India.Arie's disc was only a moderate success in sales, in comparison to the year's biggest sensation, Alicia Keys. India.Arie's biggest song, "Video," a celebration of self-beauty and worth, never even cracked the Top 20 on the pop singles chart.

Keys was expected by many to receive the most nominations for her "Songs in A Minor," which sold 4.1 million copies and was among the year's 10 top-selling discs. She received six, including record and song of the year for No. 1 smash "Fallin'," but was surprisingly left out of the album of the year category.

Still, Keys was giddy after the nominations were announced.

"It's a surprise, because people told me that 'Fallin'' would never be on the radio period," Keys told The Associated Press. "I would be happy to just attend the Grammys, let alone be nominated."

Diversity reigned in the album of the year category, where nominees included Bob Dylan for "Love and Theft," India.Arie's rhythmic "Acoustic Soul," and the potent rap of OutKast's "Stankonia" in addition to U2's "All That You Can't Leave Behind" and the bluegrass compilation soundtrack to the film "O Brother, Where Art Thou?"

Keys' "Fallin'," U2's "Walk On" and India.Arie's "Video" compete in the record of the year against OutKast's "Ms. Jackson" and Train's "Drops of Jupiter." 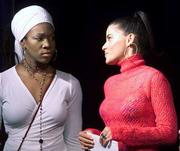 U2's "Stuck In A Moment You Can't Get Out Of," "Video," "Fallin'," Train's "Drops of Jupiter" and Furtado's "I'm Like a Bird" face off in the song of the year field, which honors the writers.

Among U2's eight nominations, the band competes against itself in the best rock song category with two singles, "Elevation" and "Walk On."

This year the National Academy of Recording Arts and Sciences announced the new category for best rap/sung collaboration that honors songs that combine vocal melodies with staccato rap cadences.

Nominees in the category include Eve and Gwen Stefani for "Let Me Blow Ya Mind," Ja Rule and Case for "Livin' It Up," Jagged Edge and Nelly for "Where The Party At," Ludacris and Nate Dogg for "Area Codes" and Mystic and Planet Asia for "W."

In the best country song category, singer Jamie O'Neal had two songwriting nominations, "There Is No Arizona" and "When I Think About Angels."

Other nominees included Lonestar's "I'm Already There," Diamond Rio's "One More Day" and "The Lucky One" by Alison Krauss and the band Union Station.

Nominees for best rap album included OutKast for "Stankonia," Eve for "Scorpion," Ja Rule for "Pain is Love," Jay-Z for "The Blueprint" and Ludacris for "Back For The First Time."

The 44th annual Grammy Awards ceremony is scheduled for Feb. 27 in Los Angeles.