Florence, Italy — Dozens of black and white pictures spanning three decades pay homage to the life and work of Margaret Bourke-White, one of the first women war photographers and the author of Life magazine's first cover photo.

The show inside Palazzo Vecchio, in the heart of Florence, features some of the photos that have made Bourke-White famous worldwide: factory workers during the Depression, inmates at the Buchenwald Nazi concentration camp, a portrait of Mohandas Gandhi at his spinning wheel. 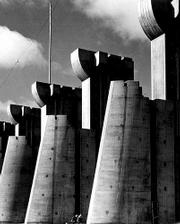 This photo by American photojournalist Margaret Bourke-White of Montana's Fort Peck Dam was used as Life magazine's first cover. The photo is among the exhibit of Bourke-White's photographs inside Palazzo Vecchio in Florence, Italy.

Also on display is a picture featuring black victims of a flood in Louisville, Ky., standing on a bread line beneath a billboard of a smiling white family in a car. The headline on the billboard reads: "World's Highest Standard of Living. There's no way like the American Way."

The daughter of an engineer-designer for the printing industry, Bourke-White initially turned her attention to machines and factories. Her early photos, on display on the show, are close-ups of metal wires, reels of thread and sheets of steel. She later became a forerunner in the newly emerging field of photojournalism and joined Fortune magazine in the late 1920s.

The show illustrates her career chronologically. Highlights also include the 1936 picture used as Life's first cover, featuring Montana's Fort Peck Dam, and a shot of two miners in South Africa during the 1950s, which the photographer once called her favorite photo.

Bourke-White was the first Western photographer allowed into the Soviet Union in 1930, and some pictures illustrate life in Moscow in those years, including everyday scenes such as children in a school.

In 1939, the New York City-born photographer documented Czechoslovakia before the Nazi invasion. During World War II, she was in Italy, Russia, North Africa and Germany.

The first woman accredited by the U.S. Army as a war correspondent, Bourke-White crossed the German border with Gen. George Patton's troops and became one of the first correspondents to enter concentration camps.

In the late 1950s, Bourke-White discovered she had Parkinson's disease and gradually withdrew from professional photography. In 1963, she published her autobiography, "Portrait of Myself." She died eight years later in Connecticut.

The show runs through Feb. 17.