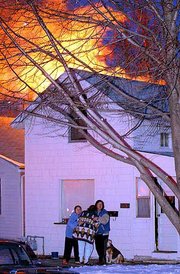 A Lawrence woman was unharmed when the attic of her one-and-a-half story house in the 800 block of Connecticut Street caught fire Saturday night. At center, the woman, who declined to give her name, seeks comfort from her neighbors while the rear of her house burns in the background. Faulty electrical wiring caused the blaze, which broke out about 5:42 p.m. and was contained to the attic and roof, Lawrence-Douglas County Fire & Medical Battalion Chief Rob Kort said. Those areas sustained heavy fire damage, Kort said, and water and smoke damaged the home's second level. The woman was displaced from her home, and the Red Cross was called to help make arrangements for shelter. No damage estimate was available late Saturday.