Arthur Miller's plays have created some of the theaters' most memorable characters, while in the process launching stinging indictments against the cruelty of a collective group-think society. "Death of a Salesman" rallied for the forgotten common man, while "The Crucible," which centered on the Salem witch trials, was actually an attack on the 1950s McCarthy hearings.

The lauded playwright has continued pursuing his themes into the twilight of his career, with plays "Incident at Vichy," "Broken Glass" and the teleplay "Playing for Time," forming a trilogy that dissects the inhumanity of the Nazi Holocaust. In light of current events surrounding terrorist attacks, the subject matter remains timely. 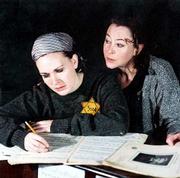 Melinda McCrary, right, and Saren Nofs Snyder star in the Coterie's production of "Playing for Time."

"Playing for Time" is the latest production from The Coterie Theatre. Geared for teen-age and adult audiences, it is far removed from many of the plays the company is noted for performing. Set in the Auschwitz-Birkenau death camp, the story revolves around a group of women spared from death by playing in the camps' orchestra. They are led by the violinist Alma Rose (Melinda McCrary), who is granted a gas chamber reprieve because of her blood ties to composer Gustav Mahler.

What it all boils down to is a ghastly musical experiment: The women stay alive only if they continue to play well.

"I think that Miller's works for the stage, particularly 'Death of a Salesman,' are American classics," director Sidonie Garrett says. "His script for 'Playing for Time' was written for film, so it has a different dynamic to it. Because of time constraints, we've had to cut down the full-length version to accommodate our audience. I think the integrity of the piece is intact, and that for a film script it translates well to the stage."

The cast has done much more than just script changes. The players have also shorn their hair to portray camp inmates, along with learning, literally, how to roll with the punches during harrowing scenes of violence when the guards assault the prisoners. Cast member Rob Eigenbrod has done double-duty by serving as the play's fight choreographer.

They've also been called upon to be musicians. McCrary has discovered the fine art of conducting an orchestra, while her co-stars have learned to play their instruments. Or at least fake it with panache.

In the small Coterie Theatre, the nine actors must share their space with the audience and an assortment of instruments, including a piano, bass drum, three violins, percussion instruments and music stands.

"The live music has added an exciting but difficult element to this production," Garrett says. "The actors who sing and play instruments, and the actress who has been learning to conduct, have added these elements to their normal work load of learning lines and blocking."

They also got a crash course in social studies, spending time comparing Sept. 11 developments with past history.

"Much of the discussion involved the way that events in history repeat themselves. Looking at the Croats-Serbs, the Sept. 11 events and events like Matthew Shepard's murder," Garrett says. "(These are) all crimes of hate. Different, yet generated from the same sort of mentality. The message of Holocaust survivors and centers has been 'never forget,' and that is a lesson that young audiences will benefit from learning through a dramatic and human theatrical experiences."

The theater is cooperating with local Holocaust centers by featuring information in after-performance talk-back sessions. The audience will also enter the auditorium through a back hallway, which will feature a Holocaust display. Jack Mandelbaum, a Holocaust survivor, along with his wife Claudia Kaplan, helped organize the display.

All these elements are geared to educate, as well as entertain, the viewer.

"It is contingent upon us to tell a group story, and also let the audience see the individuals within that group, each with a unique story and a special light," Garrett says. "I think the script mostly compares to 'The Crucible' in the sense of telling a story about an event which affects many people, in which lies and mob ignorance and fear cause innocent people to lose their lives."