Kalgoorlie, Australia — In dark skies high above the ocean south of Australia, American adventurer Steve Fossett reached the milestone he has chased for more than six years ï¿½ becoming the first person to fly a balloon solo around the world.

Members of balloonist Steve Fossett's Mission Control staff on the campus of Washington University in St. Louis, from left, systems director Bert Padelt, air traffic director Kevin Stass and mission control director Joe Ritchie, study a map of Australia looking for a place for Fossett to land his "Spirit of Freedom" balloon. Fossett on Tuesday crossed east of 117 degrees longitude, the line from which he set off two weeks ago, to complete his quest to be the first person to pilot a balloon around the world.

The 58-year-old Chicago investment millionaire covered 19,428.6 miles on the trip, according to his Web site, finally succeeding in his sixth attempt at the record.

"It is a wonderful time for me," said a calm-sounding Fossett by satellite telephone from his cramped capsule, where he has spent two weeks living on military-like rations, breathing from oxygen cylinders and using a bucket as a toilet.

"Finally after six flights I have succeeded, and it is a very satisfying experience," he added.

British tycoon Richard Branson ï¿½ who also has tried and failed to do what Fossett achieved ï¿½ paid tribute to the adventurer.

"What Steve has achieved is nothing short of remarkable. He has tried time and time again and never given up despite coming close to death on a number of occasions," Branson said in a statement.

"It was the last great aviation challenge. A challenge far more difficult than Lindbergh's crossing of the Atlantic. He deserves his place in the history books, and no one can ever take it away from him."

Fossett was already planning his next adventure ï¿½ flying a glider up to the stratosphere above 60,000 feet from southern New Zealand. He could launch that attempt later this month.

"I'm going to talk to him about this next thing he is doing, because it scares me, frankly," Ritchie said.

Learning from previous failures, this time around Fossett had plenty of fuel, no rogue nations to avoid and enough spare oxygen.

The meticulous preparation, combined with helpful weather made the flight almost uneventful. 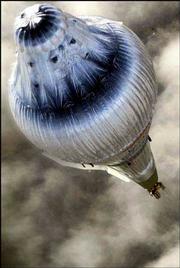 The Bud Light Spirit of Freedom balloon is expected to land early this morning in Australia.

"The best flight is not the most exciting flight. This flight has been boring," Ritchie said from Fossett's mission control at Washington University in St. Louis.

The voyage he began June 18 in western Australia took him exactly 13 days, 12 hours, 16 minutes and 13 seconds.

After breaking the record, Fossett was planning to continue drifting across Australia for up to 18 more hours until he found a safe place to land ï¿½ most likely on southern Australia's vast Nullarbor Plain.

He was expected to set down sometime after 2:30 a.m. CDT today.

What is left of Fossett's capsule after the landing will wind up in the Smithsonian Museum, according to his mission controllers.

He couldn't immediately break open champagne in his cramped capsule.

"I can't do very much celebrating here," Fossett said. "I do have a few bottles of Bud Light, but I'm saving it for the landing."

As a fax from Fossett's capsule rolled into the mission control confirming his achievement, applause broke out, and team members hugged in front of about 25 spectators and dozens of reporters.

About an hour after the balloon crossed the finish line, Fossett's team in St. Louis received a congratulatory call from Swiss pilot Bertrand Piccard, who made the round-the-world voyage as a team in March 1999 through the Northern Hemisphere with Englishman Brian Jones.

"Congratulations," Piccard told Ritchie in the phone call. "It couldn't have happened to a better guy and ... a great team."

Piccard and Jones made the trip around the world as a duo, but Fossett did it solo.

As an example of the difficulties of going solo without anyone to share the labor, Fossett was able to sleep only about four hours a day during this trip, usually 45 minutes at a time. He also had to climb outside the capsule alone, into temperatures well below zero, to change fuel tanks or repair burners.

Aside from a couple of turbulent patches, his flight was largely problem-free. At times, high-altitude winds powered Fossett's balloon along at a race car-like speed of 200 mph.

His past attempts have been far from boring.

Fossett went 14,235 miles in 1998, when his attempt from Argentina ended with his balloon's harrowing 29,000-foot plunge into the Coral Sea.

In 1998, Fossett actually traveled 15,200 miles, but the Switzerland-based Federation Aeronautique Internationale shaved the distance to account for zigzags, which don't count toward records.

Last August, Fossett set a solo balloonist duration record, flying for 12 days, 12 hours and 57 minutes before going down on a cattle ranch in Brazil.

Fossett holds world records in ballooning, sailing and flying airplanes. He also swam the English Channel in 1985, placed 47th in the Iditarod dog sled race in 1992 and participated in the 24 Hours of Le Mans car race in 1996.