Clooney laid to rest in hometown

Maysville, Ky. — Rosemary Clooney made a final journey to her hometown Friday for a funeral attended by family, friends and hundreds of fans.

The mellow-voiced singer and actress, who co-starred with Bing Crosby in "White Christmas" and staged a dramatic comeback after drugs and alcohol nearly destroyed her career, died June 29 at 74 after a long battle with lung cancer.

Pallbearers carry the casket of Rosemary Clooney out of St. Patrick's Church after funeral services in Maysville, Ky. Actor George Clooney, at center, far side of the casket, is Rosemary Clooney's nephew. Clooney died last Saturday at her Beverly Hills, Calif., home. She was 74.

More than 700 people packed into St. Patrick's Church downtown, where Clooney was baptized more than a half-century ago, to say farewell to the city's sweetheart who never forgot her roots. Many waited for hours for a seat, and by 9 a.m. ï¿½ an hour before the service ï¿½ the line snaked outside for more than a block.

"Everything she did, you felt like you were a part of it," said Debbie Roberts of Maysville, who got the first spot in line around 6 a.m.

"When you knew she was in town, it was exciting to walk into places and do that quick eyeball around to see if she was there. There was always that little bit of anticipation in your stomach no matter how many times you'd seen her."

"She was 'the girl singer,' beloved by the people," Hinds said. "We've lost a star, a light that shone brightly into all of our lives."

Her brother, veteran television newscaster Nick Clooney, gave a eulogy at the end of the hourlong traditional Catholic funeral Mass.

"Let me do something I never would have presumed to do a week ago ï¿½ speak for Rosemary ... dangerous," he said. "She would like to thank all of you for making her life richer."

Actor George Clooney, Nick's son, sat with more than three dozen family members and was one of 10 pallbearers. 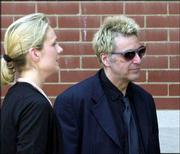 After the service, Clooney was buried at St. Patrick's Cemetery near her mother and grandmother.

Mourners said they often had seen Clooney shopping for groceries or strolling the streets whenever she returned to the river town of 8,900 near the Kentucky-Ohio border.

She frequented Delite's, a restaurant known for its Coney Island hot dogs, and was a regular at Magee's Bakery and a downtown jewelry store.

"She was the friendliest person you would ever meet, very approachable," said Dee Dee Denton of nearby Cynthiana. "She'll never be forgotten around here. She's too big a part of this town."

Born on May 23, 1928, in Maysville, Clooney started singing in 1945 with her younger sister, Betty, on Cincinnati's WLW radio. She soared to fame with her 1951 record of "Come on-a My House," and became a television and film star.

Her marriage to Oscar-winning actor Jose Ferrer and the births of their five children sidelined her career. After they divorced, her erratic behavior from drug and alcohol abuse sabotaged her attempts to return to performing.

Clooney's career was reborn in 1975 when Crosby asked her to sing with him at a Los Angeles concert. She agreed, thinking it would be a one-time benefit; it resulted in a new record contract and dozens of singing dates.