Early during the sultry evening, welcomed sprinkles of rain fell during percussionist Domingo Ortiz's pre-show drum clinic. Many fans cooled themselves in the Starlight fountains.

Touring amid rumors and conflicting reports regarding the health of founding lead guitarist Mike Houser, Friday night's concert was the band's second in a row played with the ailing musician absent. Filling in for Houser is George McConnell, former Beanland band mate of Widespread Panic keyboardist John "JoJo" Hermann and late of the band Kudzu Kings. 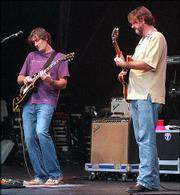 Taking his cues from lead singer and rhythm guitarist John Bell, McConnell lent his able playing, which was by turns soaring or funky to the band's mix. Also joining the band for most of the show was saxophone player Randall Bramblett, a founding member of legendary Southern/fusion band Sea Level.

Filling the lineup was the powerful rhythm section, made of Dave Schools on bass and Todd Nance on drums.

What sets Widespread Panic apart from other so-call jam bands is their deep roots in classic Southern rock. Widespread Panic owes as much to bands like Lynyrd Skynyrd and even Molly Hatchett as they do to more tripped out forebearers like the Grateful Dead or Allman Brothers. Yes, this band stretches out, but brings to mind bands like Little Feat, Traffic, Santana and even tighter funk and rhythm and blues outfits such as Tower of Power.

Perhaps leaning on funkier beats and mining deeper grooves provided for a common language as the band integrated its new guitar player. Among the most musically satisfying moments were the first set inclusion of Bill Withers' "Use Me," which built to a fever with the help of Hermann's Clavinet and Schools' soulful playing, and "Pleas" from the band's 1993 release "Everyday," on which McConnell shined. 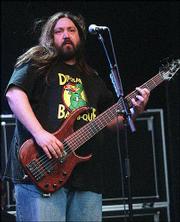 The band displayed its Southern streak best during the second set opener "Give," a song that sounds like it could have been a lost Ronnie Van Zant opus. The second set also featured the band's debut of Bramblett's "Get In Get Out" from his 2001 release "No More Mr. Lucky."

The music hit its second set peak with the band's rendition of J.J. Cale's "Ride Me High," which once again found the band dishing up hot funk. 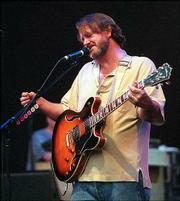 One of the most engaging portions of the set was the percussion jam that began with Ortiz working out on the congas ï¿½ to be joined by Nance on drums and assisted by opening act Galactic's drummer Stanton Moore. Moore capped off the jam by playing Schools' bass strings with sticks as Schools voiced chords on the fretboard.

The second set closed with the raucous "Chilly Water," after which the band briefly left the stage before returning to perform encores of Van Morrison's "And It Stoned Me" and yet another tune, "Travelin' Light."