"Lullaby of Broadway," a song and dance extravaganza being staged July 14 at the Lied Center, has the feel of a "Little Rascals" episode: A bunch of friends and colleagues get together and decide to put on a show.

The difference, of course, is that the cast and directors of "Lullaby" are some of Broadway's brightest young stars, whose credits range from "Les Miserables" to "Miss Saigon." And, they'll be wearing costumes by some of Broadway's top designers: One dance costume is valued at $18,000. 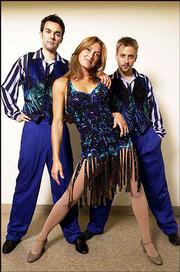 "Lullaby of Broadway" will be presented July 14 at the Lied Center as part of its national tour. The cast has been rehearsing in Lawrence since late June. From left are dancers Joseph Hale, Kristin Altfather and Michael Jablonski.

"There's 12 to 14 in the cast," producer Don Hite said. "Some of the best singers in New York City are coming in. Most have Broadway credits and national tour credits.

"They'll be a rhythm section on-stage. ï¿½ The songs weave in and out. They're songs everyone knows and loves and somehow they all fit together."

The cast began rehearsals in late June at the Eldridge Hotel and the Dance Academy, and will begin touring the show this month in Kansas and the South. The show will be staged Thursday and Friday at the Fox Theatre in Hutchinson; July 14 at the Lied Center; July 16 at Topeka Performing Arts Center; and July 17-19 at the Folly Theater in Kansas City, Mo.

The show will then tour in Knoxville, Tenn., and Savannah, Ga.

Why did the group pick Lawrence as their rehearsal spot? Shane Scheel, a Lawrence actor-singer and independent producer, worked with Hite on a production of "Songs for a New World," which played at the Fox Theatre in Hutchinson. Scheel grew up in Hutchinson.

A connection to Scheel also resulted in the casting of Kirsten Paludan in the touring show. Paludan, a singer-actor who grew up in Lawrence and now lives in Kansas City, Mo., worked with Scheel and Hite during the "Songs for a New World" production.

"I've known Shane many years and he approached me about doing the show," she said. "I did 'Songs for a New World' last spring in Hutchinson with Don and Shane."

Rehearsals for "Lullaby for Broadway" are intense, Paludan said.

Although Paludan's goal is to be a professional singer, she said working on a national tour has its perks.

"It's always great to meet the people who are working in New York and with agents," she said. "It's good to see a different perspective and how they do it there."

"So the show may have another life (after this tour)," Hite said.