Nashville, Tenn. — At 56, Dolly Parton is teaming up with an old friend: the road.

The country music veteran today will launch a 13-city tour that starts in New York. 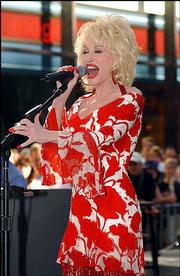 Parton said she decided to begin her first tour in decades because fans were clamoring for it.

"The people pretty much got me back on tour," Parton said. "With the last two albums and the success we had, we just got hundreds of calls every week trying to book us.

"I wasn't really doing much, because I'm not getting any big offers for movies and I've got my business things all in order," said Parton, whose theme park, Dollywood, sits at the foot of the Smoky Mountains National Park on the Tennessee-North Carolina line.

"So I thought, 'Maybe I'll go out and see if they really do want to see me. ... I will be curious to see if the people like it. If they do, I'll probably continue with it."

The singer offers an acoustic rendition of Led Zeppelin's "Stairway to Heaven" on her new album, "Halos & Horns," but so far has decided against including it on tour.

"I don't want to be hit with tomatoes and eggs," she said, joking, but with a tinge of seriousness. "We're not going to put it in the show right away. We thought we'd wait and see what the people think.

Parton has had a remarkable streak of hits, stretching back to duets with mentor Porter Wagoner in the 1960s. On her own, she ranged from the very country "Jolene" to ballads like "I Will Always Love You" and pop hits like "Here You Come Again."

But radio programmers cooled on her new music in the 1990s. By 1999, Parton concluded she may as well do as she pleased with her music. So she released "The Grass Is Blue," which won the best bluegrass album Grammy in 2001.

Parton's sound has evolved from bluegrass to acoustic country, the kind of music she sang growing up in rural Tennessee, which helps explain why she's interpreting such unlikely songs as "Stairway to Heaven" and Collective Soul's "Shine" ï¿½ for which she won a Grammy this year ï¿½ in that style.