Stow-On-The-Wold, England — Family, friends and surviving members of the iconic British rock band The Who attended the funeral of virtuoso bass player John Entwistle on Wednesday at a rural church. 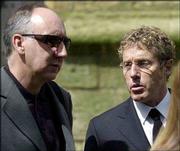 The Who guitarist Pete Townshend, left, and singer Roger Daltry leave the funeral of the group's bass player, John Entwistle, at St. Edward's Church, Stow-on-the-Wold, England. The 57-year-old musician was found dead in his hotel room in Las Vegas last month on the eve of a U.S. tour by the group.

Entwistle, who died June 27 in Las Vegas, was now "reunited with Keith up there making great music," the Rev. Colin Wilson said at the church, 60 miles northwest of London.

"I think he would want us all to be strong, determined, unafraid of the future, ready to meet every challenge, to believe in ourselves and in each other and to try to keep believing in God, even if that seems rather difficult at the present time," Wilson said.

A large crowd of onlookers gathered outside the church to see Entwistle's coffin carried inside, followed by members of his family and his girlfriend, Lisa Pritchard-Johnson.

Entwistle was found dead in his hotel room June 27 after an apparent heart attack. He was 57. A public memorial service will be at a later date.

The Who, founded in London in the early 1960s, was one of the stalwarts of the British music invasion of America, along with the Beatles, Rolling Stones, The Animals and the Kinks.

The Who's hits included "My Generation," "I Can See For Miles," "Pinball Wizard," "Won't Get Fooled Again," "Who Are You" and "You Better You Bet."

Entwistle's fingers raced across his bass frets, but he stood stoically on stage in contrast to hyperactive Townshend and boisterous Daltrey. Augmenting the rhythm section with wild drummer Moon, who overdosed on sleeping pills in 1978, Entwistle anchored The Who's dynamic sound.

The Who retired in 1982 but reunited and toured frequently. They gave a rousing performance at last year's "Concert for New York," which raised money for the victims of the Sept. 11 attacks.

Entwistle was the first band member to have solo success with his 1971 "Smash Your Head Against The Wall" and toured separately with his own group, the John Entwistle Band.