Comedy is not pretty

Only what he does isn't necessarily funny. 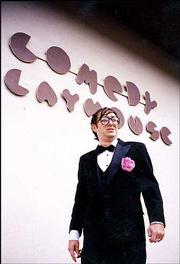 Neil Hamburger performs in punk rock clubs and other nontraditional venues for a standup performer, while honing an act that portrays him as a comedian whose material is not going over with the audience.

Call it non-comedy or anti-comedy or un-comedy, the enigmatic Hamburger is applying his method to carve a reputation as one of the most cutting-edge entertainers on the standup circuit. Some think he's the worst comedian they've ever heard. Others believe he's a clever performance artist masterminding a lingering hoax.

Whatever the case, he is gaining a kind of dual-edged notoriety, acknowledged as an underground phenom by the likes of The Los Angeles Times, Spin and Entertainment Weekly.

Deadpan and somewhat pathetic, Hamburger perpetually bares his soul about the grueling schedule he is forced to endure, his lack of a permanent home and his crumbled marriage. Off the stage, his purported lifestyle seems more comparable to Willy Loman than Jerry Seinfeld.

This persona is best encapsulated by his infamous album "Left for Dead in Malaysia," a live show recorded in Kuala Lumpur. Filled with Hamburger's not-very-topical references, divorce gags and riffs about fast food, it offers an excruciating listen. This is mainly because there is literally NO laughter from the audience members ï¿½ nor any indication they even speak English.

Yet there's a certain zen quality to Hamburger's nervous willingness to proceed in this laughter vacuum. He's often compared to the late Andy Kaufman for the ability to reinvent the nature of comedy.

Calling from a stop in Fulton, Tex. ("I did a pizza parlor show here," he said. "I got paid in pizza, so it wasn't one of the more lucrative shows. But none of them really are at this point."), Hamburger is on his way to Austin to perform at Emo's ï¿½ a nationally renowned punk club. It's another in a long line of nontraditional venues for the comedian, which also best describes his scheduled appearance Saturday night at Lawrence's Replay Lounge. Amid the clanging pinball machines and disaffected youth garbed in ironic T-shirts, this ostensibly square humorist will be forced to endure another test.

A majority of the patrons simply won't GET IT, thinking they've just happened upon a standup entertainer completely out of his element. But enough people will figure out that Hamburger is actually in the perfect place: un-comedy at an unconventional venue.

Q: Is there any danger of revealing too much of yourself through your material?

A: "I don't really have any other life other than doing what I do. The real danger is in not getting enough to eat or finding a place to sleep. In Lawrence we tried to book a hotel there, but I think you've got a beer-can regatta going on or something. Everything was booked up, so we had to book a Super 8 motel just outside of town ... in Liberal. I'm not sure where that is, but hopefully that's close by."

Q: Why do you opt to perform in music venues more often than comedy venues?

A: "I perform mostly in the pizza parlor circuit and some of the smaller casinos ï¿½ not in the Las Vegas type of thing, but more like Elko, Nev. The music shows are good because they reach a bigger and younger audience than I'm accustomed to. Plus these people buy records."

Q: How far will you go to get a laugh?

A: "I'll do whatever it takes, because that's what they're paying me for. Essentially, we'll touch on adult themes ï¿½ which wouldn't necessarily be my first choice. We'll touch on religious humor. And some of the religious humor has been sort of adult-themed. But I'll do what management tells me, if they think it will endear me to a particular crowd that we're working that night."

Q: So management decides a good portion of your material?

A: "Yeah, because they know what they're doing. You know, they've got an office and a computer system. So I think you got to trust in those guys. They're the ones that send out the payment to me, so I kind of have to do what they say. But there's room for latitude, too. I put the jokes in the order that I want."

Q: Has management ever NOT approved one of your jokes?

A: "It tends to be more like, 'You're going to be doing these music shows, let's get some jokes about music and drop these jokes about Calvin Coolidge that might not be so relevant to today's youth."

Q: How do you handle hecklers?

A: "You just try to keep plugging away. I have the microphone so I can be louder a lot of the time. But it can be difficult. They throw things at you. I did a show in Brisbane, Australia. It was a big rock festival with a lot of the younger bands. For some reason I got on this bill, which I can't complain about because it was 20,000 people. But they were there to see these angry bands like The Offspring and Garbage. The kids were worked up and in a rage. So I started to tell a few jokes to warm the crowd up. And the five minutes that I was onstage we counted 24 shoes that had been thrown. They were never the same shoe. It was 24 different shoes. So that can't be good. I tried to keep the shoes, but the security people wouldn't let me do that. Because you do wear out shoes in this occupation ï¿½ especially the right shoe because you're using that to drive. I do drive 700 or 800 miles a day."

Q: Are you based in Australia now?

A: "I've had to spend a lot of time there because of the lawsuits and tax problems. But I'm basically based in La Verne, Calif, at the storage locker there ï¿½ AAAAA Allstar Storage. I got two lockers there. I used to have three. One of them was filled with these unsold cassettes that we tried to market to the truckers at the truckstops. That didn't go so well. We overpressed those things, and there was a whole storage locker full of them. They were getting damaged because the locker was leaking. So we forgot to pay rent on that one. The AAAAA Allstar Storage people seized the contents of that particular storage locker. Now they're selling those at flea markets in the La Verne area. There can be trauma in this business. Most of my other possessions are based there. Because I'm touring as often as I am, I don't really have any other home at this point."

Q: Because there's really no reason to have one if you're always on the road, right?

A: "That's kind of the way my wife looked at it, too: There's no reason to have a husband if he wasn't around. So that fell apart, also. First you lose the wife then the house. Next I'm assuming it's going to be a limb."

Q: It sounds almost like a hellish lifestyle. Is it?

A: "It is in that there is no escape. But it could be a lot worse. I could be doing this and only working 300 nights a year. Then I'd be left alone a lot of the time to think about things."

Q: Can you give me an example of a current pop culture phenomena that you love to talk about in your routines?

A: "I like some of the more topical things, like Spice Girls or Timothy McVeigh's execution. I try to keep the act fresh, but it's hard. Some of these jokes I've had for so long. And you can't teach an old dog new tricks. So I spend a lot of time rewording those dumb blonde jokes. Now they're about Osama bin Laden."

Q: It's amazing you can transfer material like that to a whole new person. Can you give me an example of one you retooled?

A: "I don't think I want any of these printed. They haven't been getting the laughs that they should."