Kansas City, Mo. ï¿½ Nobody listens to techno anymore. Eminem says so. Heck, even Moby says so too. They could be right.

Thursday night Kansas City's 9,000-capacity City Market was barely a one-third full. That may be just as well. A Moby show is half concert and half rave, and the show is just as entertaining away from the stage as it is on it, and the more room the dancer's have, the better. 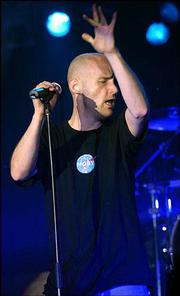 Moby was in Kansas City on the second night of a tour to support his new release "18." It is the follow-up to his multi-platinum 1999 release "Play," an album from which the artist was, remarkably, able to license every single track for commercial use. It's safe to say that the diminutive, shorn, self-effacing artist is officially richer than most people have the capacity to imagine. 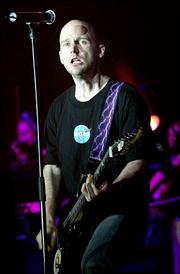 This could account for the obvious delight Moby takes in performing before even a sparsely filled venue. Warm and engaging, he took time to read aloud from the numerous T-shirts that were tossed to him on stage and offered plenty of unrehearsed banter.

Onstage Moby plays guitar and sings, and occasionally fools around a bit on congas and keyboards. He's backed by an able techno/alt combo consisting of turntables, keyboards, bass, a three-piece string section, a backing vocalist and Kansas University alum Scott Frassetto on drums.

Their two-hour, 20-song show drew heavily from "18," including what he described as the only post Sept. 11 composition on the record "We Are All Made Of Stars." Moby describes the song as an expression of his "aspirations for compassion and solidarity in the face of difficult circumstances." 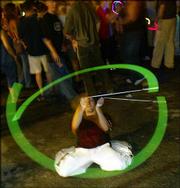 Most of the rest of the set list was drawn from "Play" though Moby included a smattering of other songs, most of which can be found on the compilation "Moby Songs."

Other than a brief yet rousing rendition of the Ramones' "Blitzkerig Bop" played in response to a facetious request from the front row, the concert was all dance music, embraced, booty and soul by the largely youthful crowd in attendance.

For encores, Moby closed with his hit "Porcelain," and "Feeling So Real."