New York — When Walter Mosley's family would gather on Friday and Saturday nights, the stories would start.

"My father," the author says, "was by far the best storyteller on both sides of the family." 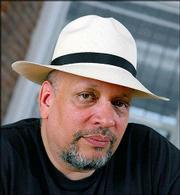 Novelist Walter Mosley poses for a portrait at his studio in New York. Mosley's newest book, "Bad Boy Brawly Brown," is the seventh in his Easy Rawlins detective series.

And the way Leroy Mosley told stories, many about growing up black in the segregated South, was what made the young Walter "love storytelling," and made him want to become a storyteller himself.

Mosley, 50, is considered one of this country's pre-eminent mystery writers. He has also written science fiction, literary fiction and one nonfiction book ï¿½ 14 books altogether that have been translated into more than 20 languages.

His most recent book, "Bad Boy Brawly Brown," is the seventh in his well-known Easy Rawlins detective series. This one begins in 1964, three months after the Kennedy assassination.

"The Negroes are getting anxious for some changes," explains one white character. They want to end de facto segregation, they want better jobs, and they want the same kind of treatment that white war veterans get when they come home from a war.

It's a time when civil rights workers are being killed and black radical groups like the novel's Urban Revolutionary Party are beginning to organize.

Brawly Brown, one of the Revolutionary Party's main supporters, is 23, but as a no-nonsense rooming house owner declares, "He's a boy boastin' he's a man while (his mother) washin' the ... stains outta his drawers." Like most mothers, Brawly's wants her son "outta this safe," and she enlists the help of Easy, who is known to "trade in favors" for people when they can't go to the authorities.

Dressed in a black shirt, black pants and sporting a salt and pepper goatee, Mosley looks quite the New Yorker ï¿½ smooth and very cool. A best-selling writer, he is hardly unfamiliar with long interviews. Not wanting to be encumbered with a microphone, he quickly locates a roll of toilet paper and secures the microphone inside of that.

He sits at the head of a long conference table in an almost empty room he calls his office. The only other piece of furniture is a leather divan, off in a corner. He says he uses the large room ï¿½ with a freshly polished wood floor and five floor-to-ceiling windows ï¿½ for book parties and meetings. Sometimes he brings his laptop in to write. The only sound in the room is the loud air conditioner.

Mosley enjoys talking about his father, whom he was very close to. Leroy Mosley died in 1993. Bits of his father's life show up in his son's fiction.

Mosley has heard a lot of stories about what it means to need an open door. Like Easy, Mosley's own father became an orphan about age 9 and then "a wild boy riding the rails."

Also like Easy, Leroy Mosley found a home in Houston, the black area's Fifth Ward, then moved up to Los Angeles, "where many came to live out their dreams." In California, also like Easy, Mosley's father found a safe, secure job as a custodian in a public school.

And like another Mosley character, Paris Minton in Mosley's book "Fearless Jones," Mosley's father was born in New Iberia, La., about an hour from the infamous Angola Prison. "I loved it," says Minton. "As far as I could walk in any direction there were colored people, colored people, and no one else." Minton leaves the South because he loves reading and the white librarian makes certain he knows that the white library, with its 20-foot-high ceiling packed with books, is closed to him, a black child.

But as much as Leroy Mosley told his son about growing up in the South, Mosley says, he never talked about riding the rails. "He never told me about the inside of one box car. And toward the end of his life, when I asked him about it, he'd just cry."

Although Mosley has been to Louisiana "a lot," he's never been to New Iberia. "It took so many years for my father to go back to the South. He was so afraid of it, it was so painful to him, his history, that I've absorbed a lot of it."

Mosley says it's very deliberate. "It's a whole different thing when you're colored in America," he says emphasizing the word colored. "You're race conscious. ... Once, you're a victim and you live in it, then you live by it." But, he admits, even Easy gets a little silly about it. At one point in "Brawly Brown," he describes two white policemen: "one cop had black hair and the other cop had dark brown hair."

"Because," Mosley laughs, "like, what's the difference between black hair and dark brown hair?"