Nature illustrators to gather in Lawrence next month

About 150 natural science illustrators are coming to Lawrence in August for their annual conference, and several special events are being planned to make their stay more educational and enjoyable.

The Guild of Natural Science Illustrators conference will be Aug. 4-9 at Kansas University's Natural History Museum. 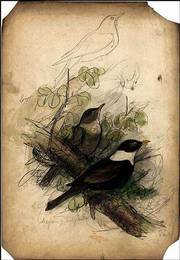 A detail from a work by John Gould.

"Lawrence was chosen because of Allen Press," said Sara Taliaferro, a research assistant at the museum who is helping to organize the event. "They are the premier printer of scientific materials in the nation."

Taliaferro said the conference will feature workshops covering traditional and digital illustration methods and field trips to Hallmark Cards Inc. in Lawrence, the Konza Prairie near Manhattan and the Nelson-Atkins Museum of Art in Kansas City, Mo.

The keynote speaker will be Ed Bell, artistic director for Scientific American Magazine. He will talk at 9:15 a.m. Aug. 5. Steve Buchanan, who has designed stamps for the U.S. Postal Service, will speak from 8 a.m. to 10 a.m. Aug. 7. Buchanan's series include such subjects as tropical flowers, carnivorous plants and insects and spiders.

Some of the other events being planned in conjunction with the conference are:

ï¿½ A juried art exhibition and a traveling exhibit of works by the guild's members at the Natural History Museum.

ï¿½ "Fish, Flowers and Flying Things: Nature at the Spencer," an art exhibition, Friday through Sept. 1 at the Helen Foresman Spencer Museum of Art at KU.

ï¿½ "Moth and Insects," an exhibition of works by John Cody and Gilles Bosquet, through Aug. 9 at Lawrence Public Library, 707 Vt.

ï¿½ A tour on Spencer Research Library, which houses the collection of John Gould's bird and animal illustrations.

The Guild of Natural Science Illustrators conference will be Aug. 4-9 at Kansas University's Natural History Museum.Registration forms and additional information are available online at www.gnsi.scienceart.com/index.html, by calling Sara Taliaferrro at 842-4051 or by e-mailing tally@ku.edu.

Taliaferro said the guild began as a series of meetings at the Smithsonian Institution in 1966. The guild had 21 charter members, mostly scientific illustrators from the Smithsonian and nearby medical schools.

The guild now has more than 1,000 members around the world.