When Eddie Cochran recorded "Summertime Blues" in 1958, whining about "a-workin' all summer just to try to earn a dollar" could suffice for youthful rebellion.

In 2002, with a world looking infinitely more dangerous, confusing and vacant to young people, it's no surprise that there are flavors of rock 'n' roll that raise a much bigger fuss and a much louder holler.

The mosh pit was just heating up as Coal Chamber accompanied the action on the floor.

Each band in turn raised the bar incrementally, if only slightly, in terms of musical skill and its ability to incite the audience to respond in kind to the rage on stage. Finally a respectable mosh pit developed midway through Coal Chamber's set.

Consisting of vocalist Dez Fafara, drummer Mike Cox, bass player Nadja Puelen and guitarist Miguel "Meegs" Rascon, Coal Chamber has reached something like musical maturity with the release of "Dark Days," its third effort. Rather than simply charging like a musical freight train for the length of its set, Coal Chamber now can shift gears into softer, more atmospheric and even darker spaces, as when performing the title song from "Dark Days." 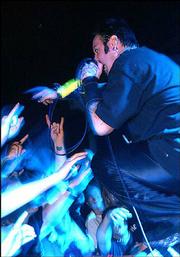 Mainly it was hard-charging music that typified Coal Chamber's set. From the opening pair of "Loco" and "Big Truck" from the 1997, self-titled debut release, the band demonstrated they haven't strayed far from what they know best. It may not be much, but it's what the fans require and they deliver well enough.

Depending on the durability of one's ears, it was fortunate or unfortunate when the set was cut short when an unruly fan absconded with a fire extinguisher and set it off in front of the stage. There were no encores performed. There's little doubt that on their next visit Coal Chamber's members will pick up right where they left off.