While Emmy favorite "The West Wing" was a close second with 21 nominations, top bids also went to actor Michael Chiklis, star of the violent and volatile cable police drama "The Shield" on FX, and to another cable series, HBO's sardonic comedy "Curb Your Enthusiasm." 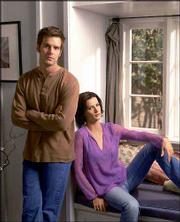 Along with "Curb Your Enthusiasm," nominees for comedy series were HBO's "Sex and the City," CBS's "Everybody Loves Raymond," NBC's "Will & Grace" and "Friends."


Nominated with Hall, Krause and Chiklis for dramatic actor were Martin Sheen of "The West Wing" and Kiefer Sutherland for "24."

Other dramatic actress nominees besides Griffiths and Conroy: Amy Brenneman for "Judging Amy," Jennifer Garner for "Alias," and "The West Wing's" Allison Janney.

In the reality programming category, MTV's top-rated show "The Osbournes" competes with PBS's "American High," The Learning Channel's "Trauma: Life in the ER" and HBO's "Project Greenlight" and "Taxicab Confessions."

Competing with Matt LeBlanc and Matthew Perry ("Friends") for best comedy actor: Kelsey Grammer of "Frasier," Bernie Mac of "The Bernie Mac Show" and Ray Romano of "Everybody Loves Raymond."

Last year's winner, Patricia Heaton of "Everybody Loves Raymond," joins Jennifer Aniston ("Friends") in the comedy actress category, along with Jane Kaczmarek of "Malcolm in the Middle," Deborah Messing of "Will & Grace," and Sarah Jessica Parker of "Sex and the City."

HBO's epic World War II story "Band of Brothers" was among the overall leading nominees with 19 mentions, including best miniseries. Other competitors in the category are ABC's "Dinotopia," TNT's "The Mists of Avalon," and A&E's "Shackleton."

The supporting comedy actor category included Peter Boyle and Brad Garrett of "Everybody Loves Raymond," David Hyde Pierce of "Frasier," Bryan Cranston of "Malcolm in the Middle" and Sean Hayes of "Will & Grace."

Cynthia Nixon and Kim Cattrall of "Sex and the City" were nominated for supporting comedy actress, along with Wendie Malick of "Just Shoot Me," Megan Mullally of "Will & Grace" and Doris Roberts of "Everybody Loves Raymond."

"The West Wing" also dominated the best dramatic supporting actress category, with nominations for Mary-Louise Parker, Stockard Channing and Janel Moloney, and other nominees Tyne Daly of "Judging Amy" and Lauren Ambrose of "Six Feet Under."

The 54th annual prime-time Emmy Awards will air Sept. 22 on NBC. A host has yet to be announced.