New York — After having a foot of her colon surgically removed this month, Sharon Osbourne has learned that her cancer has spread.

"It was not the best news," the wife of heavy-metal rocker Ozzy Osbourne and matriarch of the MTV reality series "The Osbournes" told People magazine for its July 29 issue. 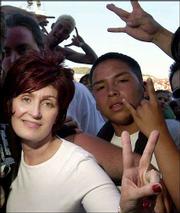 "You think nothing will ever happen to you. You're invincible. Then after you get over the shock and panic, you realize how lucky you are to be alive."

The 49-year-old was diagnosed with colorectal cancer on July 1, after her husband urged her to see a doctor for a long overdue checkup. Two days later she had surgery. Then on July 8, one of two lymph nodes that were removed tested positive for cancerous cells, indicating the disease had spread.

Ozzy Osbourne, who jokes on his hit TV show that he's "the prince of (bleeping) darkness," said he's done a lot of praying for his wife. They have three teenage children, two of whom ï¿½ Jack and Kelly ï¿½ appear on the show.

"She's my whole world," he told the magazine. "She's the best lover I've ever had, the best friend I've ever had. She has been my pillar of strength for many years."

Sharon Osbourne says MTV's cameras will follow her to chemotherapy when shooting on the second season begins. New episodes are to begin airing in the fall.

"We need to get a different vibe going," she said of the treatment center. "I think I'll bring some music, introduce myself, maybe we can sing some songs and cheer the place up."