A Kansas University theater professor will be going to Washington, D.C., this fall to research the life of President Theodore Roosevelt for a one-man show he hopes to write and perform.

Jack Wright, who has been with KU department of theater and film for 26 years, became interested in studying Roosevelt as a result of his research into Kansas journalist William Allen White. 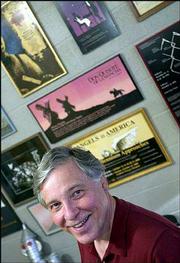 Kansas University theater professor Jack Wright will be on sabbatical this fall while he does research for a one-man show on Theodore Roosevelt.

Wright portrayed White in "The Sage of Emporia," a one-man play by Kansas City editor-author Henry Haskell that he has performed off and on throughout the country since the early 1980s.

"In 'The Sage' (White) spends a lot of time talking about Teddy Roosevelt," Wright said.

Wright's interest in White was piqued when Haskell contacted him to see if he knew of any actors who might be suitable to portray White in "The Sage." Haskell ended up asking Wright to take the lead role in the 2 1/2-hour play.

As he learned more about White, Wright became aware of the editor's connection to Roosevelt, too. Roosevelt, like many other presidents, sought White's counsel and came to Emporia to stay at his home.

"I've always loved Teddy Roosevelt," Wright said. "He was interested in so many things. He has a bit of an ego, but he was a brilliant analyst. He had become so important to the country at a young age.

Wright said he will play both editor and president in his new show. In the first act, he will portray White; in the second act, he will become Roosevelt.

"If the research goes well, in November and December I will be writing," he said. "I'd love to ï¿½ maybe do it in the summer. I'd like to premiere it at KU since I premiered 'The Sage' here."