Mexico City — Frida Kahlo's life is like one of her paintings: a surreal experience with splotches of color that flirts on the fringes of reality, an experience even more intoxicating than some of the tall tales she told in her short life.

Kahlo's paintings are a raw diary of her life, capturing moments of betrayal, jealously and ultimately love. 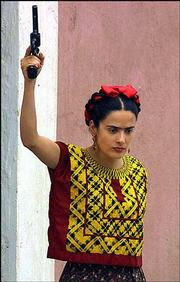 Actress Salma Hayek, dressed in a traditional blouse used by the indigenous women of Juchitan and favored by Mexican icon Frida Kahlo, holds a pistol during the filming of the movie "Frida" in Puebla, Mexico. "Frida" is expected to be released next spring.

This fall, her life will be played out in movie theaters, with actress Salma Hayek portraying the Mexican icon and feminist and Alfred Molina playing Kahlo's love, the artist Diego Rivera. The cast also includes Antonio Banderas and Ashley Judd.

Kahlo's steamy romance with Rivera has been called one of the greatest, if not most unusual, love affairs of all time. Their addiction to each other spanned 25 years and was filled with affairs, including one Kahlo had with Russian revolutionary Leon Trotsky.

But it was Kahlo's obsessive love affair with Rivera that inspired her art, and ultimately drove her to the brink of suicide.

The film focuses on Kahlo's often rocky relationship with Rivera, and their place in Mexican society. Included in the twisty tale is the rivalry between Rivera and David Siqueiros (Banderas), another famed Mexican artist.

Kahlo was considered either a temperamental genius or a big fake whose emotional relationship with Rivera never really existed.

One of Rivera's lovers, Dolores Olmedo Patino, 82, recently claimed that Rivera and Kahlo's tumultuous love affair was nothing more than a trumped-up tale. A self-made multimillionaire, Patino maintains it was she who was Rivera's muse and lover.

Ironically, Patino owns the single largest private collection of Kahlo's works, along with 137 of Rivera's paintings.

Patino's 16th-century home, in the suburbs of Mexico City, is more than 20,000 square feet and has been turned into a museum, showcasing Rivera and Kahlo's works.

Patino and Rivera met in 1930. Rivera spent his last years with Patino in Acapulco, where he painted portraits of Patino and her children, as well as a series of 25 sunsets.

The series occupies one of the exhibition halls in Patino's home-turned-museum and is displayed in a semicircle. Rivera has said that the "curve of his life" could be seen in these sunsets.

Some have described Kahlo as a little girl struggling with an abusive husband. Others claim she was a cold, calculating woman who was vindictive and carried a grudge.

Mexican painter Arturo Garcia Bustos, who was a student of Kahlo's and later became friends with Kahlo and Rivera, said the woman he knew was a combination of everything people said about her.

"Yes, she was temperamental but she was also very sweet and understanding," Bustos said recently. "Her handicaps determined her personality."

Born in Mexico City in 1907, Kahlo was in a near-fatal bus accident when she was 18, which left her bedridden and practically immobile for months. She had a broken spinal column, along with a broken collarbone, ribs, pelvis and 11 separate fractures in her right leg. Her right foot was crushed and her shoulder was out of joint.

For more than a month, she was forced to wear a heavy plaster cast while her body mended. Her family put a mirror on top of her bed and gave her paints. Out of boredom, she would paint her plaster cast. It is from there that her love of art grew.

Despite her miraculous recovery, Kahlo was plagued with constant pain and underwent numerous surgeries.

Kahlo's work is displayed all over the world, including at the National Museum of Women in the Arts in Washington, D.C., and at the Museum of Modern Art in New York City.

"Loaning my Frida to Tate is like letting go of one of my precious children," Madonna said at the time. "But I know she will be in good hands and the exhibit would not be complete without her."