New York — Michael Learned was struggling with a line during rehearsals of "All Over" ï¿½ Edward Albee's 1971 play being revived off-Broadway ï¿½ when a startling thought occurred to her. 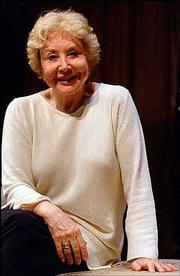 Actress Michael Learned is performing in "All Over," Edward Albee's 1971 play being revived off-Broadway.

Learned was one of America's highest-paid housewives in the 1970s, playing the warmhearted Ma Walton in "The Waltons" on television.

These days, she is working for more esoteric rewards: the challenge of speaking Albee's elegant lines on stage and the joy of acting opposite her longtime friend, Rosemary Harris, for the first time.

"This play is like poetry to me," she says. "I never get tired of his words. Try writing one of his sentences in other words and you'll fill up pages."

"All Over" unfolds during the final hours of a wealthy dying man, never seen in the play. Learned plays his mistress; Harris is his wife. The current production began life at the McCarter Theatre in Princeton, N.J., earlier this year.

Learned, 63, has been making the most of her work in the theater. In the past decade, she's appeared in a Broadway revival of Gore Vidal's "The Best Man" and in a Boston production of Albee's "Three Tall Women," among many others.

She began her professional career on stage in the 1960s and early 1970s, when she was a member of the American Conservatory Theatre in San Francisco. There, she appeared in a long string of productions, including a version of Noel Coward's "Private Lives" directed by Francis Ford Coppola (who was editing "The Godfather" at the time).

"The way I would describe doing an hour series is being a racehorse and plowing the field instead of running the race," she says. "In the theater you get to run the race."