Los Angeles — A producer has sued Ozzy Osbourne and the rock musician's wife, claiming the couple stole the idea for their hit MTV reality series "The Osbournes" from him.

Plaintiff Gary Binkow said he had met on several occasions with the couple and executives from Miramax TV between 1999 and 2000 to discuss "a real-life docu-sitcom" about their family, according to the lawsuit filed Thursday in Los Angeles Superior Court. 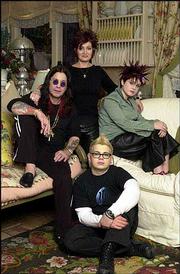 The Osbournes, from left, Ozzy, Sharon, Jack and Kelly, are facing a lawsuit over their hit reality series.

The court papers include what Binkow said was a copy of his original treatment of the proposed series from January 2000, registered with the Writers Guild of America, The Hollywood Reporter reported Friday.

The lawsuit seeks unspecified damages for breach of contract and fraud.

Lisa Vega, a spokeswoman for the family, said previously published reports have made it clear that Binkow was not the show's creator. MTV was not named in the lawsuit.

Binkow is executive producer of "Neverland," a movie starring Johnny Depp and Kate Winslet that's being shot in London.

A second season of the popular show is set to begin shooting in a few weeks, with Sharon Osbourne beginning chemotherapy for cancer that she recently learned had spread beyond her colon.

Friday, Osbourne said he was taking three weeks off from Ozzfest 2002 ï¿½ the annual summer tour that Sharon Osbourne created ï¿½ to be with his wife during her first round of treatment. The band System of a Down will replace him as the headlining act.

"This has been one of the hardest decisions I've had to make and I'm hoping that my fans will understand," the singer said in a statement. "Ozzfest must continue with or without me since it's Sharon's baby."

Osbourne will leave the tour after Sunday's show in Atlanta and plans to return Aug. 22 in Denver.