Sammy Hagar and David Lee Roth, touring together yet separately, demonstrate the difference between playing and performing. Hagar is all about having a blast and being delighted that his audience is there to be part of it. Roth just wants you to look at him as though he's still the king of MTV. Hagar's out there rocking people's socks off. Roth's just trying to pull this off. 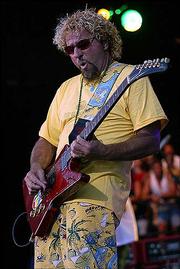 A flip of the coin determined which of the two former Van Halen lead singers would close the first show of their co-headlining summer tour, with the two of them alternating for the rest of their adventure.

A huge crowd at Friday night's Verizon Wireless Amphitheater show in Bonner Springs, far larger than either artist can attract separately, got the short end of that deal.

Each rocker played a full-length, 90-minute show. Hagar, at first glance the more clownish of the pair, who was decked out in bright yellow finery from Cabo Wabo, his nightclub in Cabo San Lucas, Mexico, performed with his band, the Waboritas. He was flanked on-stage by a pair of bleachers, where several dozen fans got the chance to spend the concert on stage with Sammy.

Joining Hagar on tour this summer is Van Halen bassist, Michael Anthony, looking like he's having more fun than he's had since the Van Halen brothers unceremoniously booted Hagar from the band. 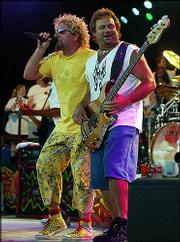 Hagar, whose success preceded and continues after his tenure with Van Halen, brought Anthony out to help with the Van Halen material after playing such fan favorites as "Three Lock Box," "One Way To Rock" and "Heavy Metal Music." When they attacked such standards as "Top Of The World," "Right Now," "Best Of Both Worlds," "Why Can't This Be Love" and "Finish What Ya Started," there was no effort to recreate Van Halen.

Roth, on the other hand, has nothing else he can do. Fronting what can only be described as an unremarkable Van Halen tribute band, Roth, decked out in bleached hair and blue metallic spandex, attempted a journey back to pre-1984. While not berating his soundman or telling his eager young band members where to stand, he ambled about rather aimlessly, storing energy for the next attempted karate high kick. 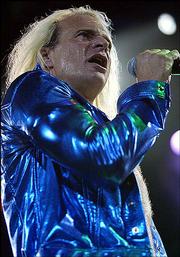 His voice now stuck deep in the lower registers, Roth plowed through radio classics including "Hot For Teacher," "Panama," "And The Cradle Will Rock" and "Running With The Devil." Late in his set Roth ill-advisedly and abetted by ego, appeared with an acoustic guitar for "Ice Cream Man," demonstrating in one more way that another sort of David Lee Roth "Unplugged" might be a very good idea.

Van Halen may be the rock band of your youth, but Friday night, Sammy made it clear that "Van Hagar" was truly the better band. Fortunately for him, he has more than those laurels on which to rest.