Shaftsbury, Vt. — Norman Lear, among the most influential television producers of all time, says his best production is yet to come. It won't be a TV show, though. It's a gift from the heart.

"I am building a show," Lear said. "It's a revival, a red, white and blue revival ... that will get people to their feet, witnessing to the fact that they realize they matter as Americans." 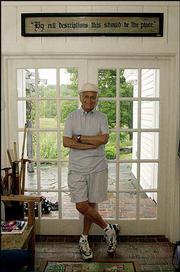 Norman Lear, seen at his home in Shaftsbury, Vt., has developed a traveling tribute to the Declaration of Independence. Lear, the TV producer who gave America "All in the Family," turns 80 today.

The words, images and ideas tumble out of Lear with an energy and enthusiasm that appear to give lie to the fact he turns 80 today.

The man who gave America "All in the Family" now wants to share with Americans their Declaration of Independence. He and a partner bought a rare copy of the 1776 document two years ago for $8.14 million. The broadside forms the centerpiece of a traveling tribute.

"This is the birth certificate of the United States," said Lear, who says he cried when he first saw the copy he eventually bought.

He has done plenty.

His career as a producer, director, comedy writer and screenwriter brought him four Emmys, a Peabody, induction into the Television Academy Hall of Fame ï¿½ and the National Medal of Arts, given in 1999 by then President Clinton, who said Lear "has held up a mirror to American society and changed the way we look at it."

Lear's legacy also includes "Sanford and Son," "Maude," "Mary Hartman, Mary Hartman" and "The Jeffersons," which provided unvarnished views of people and issues not previously seen on network television. He created Archie Bunker, an outspoken, blue-collar bigot, and raised such issues as abortion, homosexuality and anti-Semitism.

However, a thread of nostalgia ran through "All in the Family" as evidenced by the opening theme, "Those Were The Days," a thread that also has been woven throughout Lear's life and connects him with the future.

"I am of that generation that had far more appreciation for America and American values than I see today," he said in an interview with The Associated Press at his summer home.

"My grandfather used to write the president all the time," Lear said. "I remember picking out of the bronze mailbox a little white envelope that said 'White House' on it.

"There was everyday proof that America worked. My grandfather felt that he mattered. He felt it enough to write the president and he mattered enough to get an answer."

That connection to country is what Lear seeks to rekindle with the touring Declaration of Independence. He acknowledges it will be a tough task.

"We are a country of great excess," he said. "That defeats an awful lot of the stuff that has made us great."