Being nominated as one of Lawrence's most eligible bachelors can sometimes be a family affair.

Doug Yetman, for instance, was suggested for the honor by his sister, Jill Yetman-Michaelson of Los Angeles. She e-mailed her nomination. 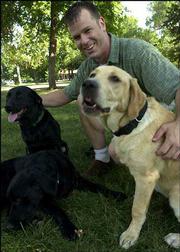 When Doug Yetman isn't running Mojo's restaurant, he spends much of his free time with his three Labrador dogs ï¿½ from left, Cinder, Duncan and Thelma Lou. Yetman was nominated by his sister, who lives in Los Angeles.

"I think he'd be a stellar candidate for a lot of reasons, most notably his interest in so many different things, and his desire to do so much. It's what keeps him an interesting, engaging person," writes Yetman-Michaelson, 35.

"Doug is a renaissance man of sorts with many talents and interests. He loves cooking, fishing, running and hiking. He has a renowned sense of humor, which keeps him out of trouble more often than it gets him into it."

Yetman, 32, and James Langford are the longtime owners of Mojo's, 714 Mass., a restaurant known for its spicy chicken wings.

A 1992 graduate of Indiana University, Yetman has never been married and has no children. He loves romping at the dog park with his three pooches: Cinder, Duncan and Thelma Lou.

Yetman's status as a good catch comes as no surprise to his business partner.

"Doug's very compassionate and has a great sense of humor," Langford said. "He always has people back there (at Mojo's) cracking up. When we used to go out (drinking), he definitely had their attention."