Employees at Einstein Bagel Brothers nominated their general manager, Evan Jackman, as Lawrence's most eligible bachelor. It's obvious he charms them every day.

"He is a great manager, hard worker, funny and good-hearted," wrote four of Jackman's college-age employees. 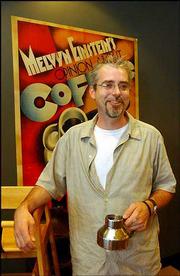 Evan Jackman, a manager at Einstein Bagel Bros., 1026 Mass., has a great working relationship with his staff, who think he's one of the city's most eligible bachelors.

Jackman, 38, said he originally was not excited about being featured as a bachelor.

Jessica Dumler, a four-year bagel shop employee, said she and her co-conspirators nominated Jackman out of affection.

"We want the single 30-year-old-and-up women coming in here and checking him out," she said.

When Jackman is not working, he plays the drums in a three-person rock band, reads novels, golfs, enjoys downtown Lawrence and maintains many friendships. Although Jackman wouldn't mind finding a companion, he values his freedom.

"Relationships are always best when people have a certain amount of independence," he said.

"I don't think I've ever been happier," he said.