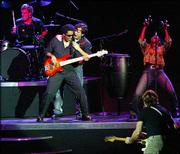 On a spare, black stage Mellencamp was flanked by Miriam Sturm on violin and Andy York and Mike Wanchic on guitars. On an elaborate riser was Moe Z on keyboards, John Gunnell on bass, drummer Dane Clark, vocalists Pat Peterson and Courtney Kaiser and Jenn Christy on percussion.

Mellencamp is a confidant performer. He's been at it so long that he has learned to look spontaneous while the music itself is so perfect a recreation of his recordings that it betrays its rote nature.

Mellencamp quickly made his way to hits such as "Jack And Diane," "Paper And Fire" and "Lonely Old Night," before the change came.

During "Crumblin' Down," a rousing sing along, the storm rolled in. And though the amphitheater has no walls to come crumblin' down, the audience braced itself and by the time he sang the opening bars of "Small Town" the sky had opened up.

Following a brief power outage Mellencamp and his band, now themselves getting damp from the rain blowing under the stage's massive roof, took the unplugged approach and performed the spiritual "This Train Is Bound For Glory."

As the rain continued and the vast majority of the crowd stayed, true spontaneity took hold and the concert became a celebration. The drenched audience enjoyed "Pop Singer," "R.O.C.K. In The U.S.A.," and "Hurts So Good," which in a fit of whimsy featured drummer Dane Clark on lead vocals.

Shannon McNally joined the band to share lead vocal duties on "Pink Houses," and the concert had become a joyous event onstage and off.

Mellencamp, acting in solidarity with his baptized fans, remained onstage while his band took a pre-encore break. If "Check It Out" was an anticlimactic finish, and if the show was somewhat abbreviated, neither those on stage or those in the audience was complaining, each grateful the other had stuck it out.