Rukeyser program picked up at CNBC, distributed to network's affiliates

It couldn't have happened anywhere but the Public Broadcasting Service, stung in this case by its unique decentralized structure. 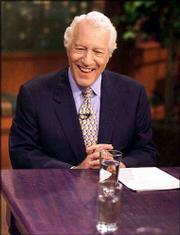 Louis Rukeyser smiles on the set of his new program, "Louis Rukeyser's Wall Street," at CNBC'S studios in Fort Lee, N.J. Less than a month after his unexpected exit as host of public television's "Wall $treet Week," Rukeyser was back with a brand new show on the financial network. He also arranged for his new show to be made available on weekends to any PBS station that wanted to air it.

Fans of the veteran financial journalist know the basics. Rukeyser's Maryland producers wanted to de-emphasize his role on the Friday night Wall Street wrap-up he started 32 years ago. Rukeyser cried foul, was fired, then moved to CNBC.

Rukeyser then took advantage of the way PBS worked to come up with an ingenious way to torture his old employers.

He arranged to make the CNBC show available on weekends to any PBS station that wanted it. Currently, 158 of the nation's 349 PBS stations carry "Louis Rukeyser's Wall Street."

There's nothing PBS' management can do about it. The system is set up to give individual stations the power to decide what to put on their air, rendering public broadcasting's central authorities far less powerful than their commercial counterparts.

Imagine, for a minute, CBS firing Dan Rather and the anchor still showing up to deliver the news on about half of the CBS stations. It wouldn't happen.

Long Island's WLIW-TV, which distributes Rukeyser's show to other PBS stations, said it was done to offer a choice. Many stations also wanted to appease corporate contributors who were angry with how the journalist had been treated.

"We certainly didn't do it to aggravate PBS," said Terrell Cass, president of WLIW-TV. "I don't see it as any threat, particularly now that there is so much water under the bridge. I was at the PBS meeting last month and it wasn't even mentioned by anybody."

There are plenty of financial journalism shows on the air, Cass said. Besides, PBS stations are forbidden by CNBC from airing Rukeyser's new show on the same night as PBS' revamped "Wall $treet Week with Fortune."

Jeff Hankin, a spokesman for Maryland Public Television, also said he didn't believe that the distribution of Rukeyser's CNBC show undermines his old one. "Wall $treet Week with Fortune" is being carried on 315 of the 349 stations, with no attrition from the Rukeyser days.

"We're choosing here not to carry rerun cable material, but some others may," Hankin said. "That's their choice, and it's important that they make that choice. The question is going to be where people are finding the information they want a year from now. It's a decision that's not going to be made by programmers. It's going to be made by viewers."

Who's winning so far? No one.

Since its CNBC debut on April 19, "Louis Rukeyser's Wall Street" is seen by an average of 410,000 viewers on Friday nights. CNBC is thrilled; that's 2 1/2 times more people than were watching the cable channel at that hour.

Yet it's less than a quarter of the 1.7 million viewers that Rukeyser averaged in his PBS time slot before his ouster.

In the four weeks it has been on the air since the makeover, "Wall $treet Week with Fortune" has drawn barely a million viewers.

In other words, the audience for the two shows together is less than it was when Rukeyser was undisturbed.

Hankin pointed out that the lower the stock market goes, the fewer people want to watch financial shows, and new programs need time to find their footing.

Still, the numbers are ominous. More disturbing for "Wall $treet Week with Fortune" is the defection of three of its four largest underwriters after Rukeyser left. Hankin said Maryland Public Television was confident the missing underwriters would be replaced by this fall, something that's crucial to its survival.

PBS President Pat Mitchell publicly supported Maryland this spring. She couldn't say much else. Even if she wished the flap had never taken place, PBS management is loathe to second-guess local station managers, and Mitchell has frequently encouraged producers to freshen its long-running shows.

"I suppose in a perfect world, I won't lie to you, it wouldn't have happened," said Jacoba Atlas, PBS senior vice president for programming. "But our stations are autonomous, and they feel they are serving their audience. It would be more disturbing if they were not taking 'Wall $treet Week' at all."

That's the curse of PBS' decentralized system. In theory, the idea is to make PBS stations more responsive to the local community than commercial broadcast affiliates.

In practice, it makes Mitchell's job one of the hardest in television. She'd like PBS stations to speak with one voice as much as possible, but 349 other managers can easily overrule her.

When Mitchell bought filmmaker R.J. Cutler's "American High" documentary series last year in an effort to find some younger viewers for PBS, several stations refused to air it for fear it would alienate older people.

On the bright side, Atlas said, most PBS stations are sticking with PBS' "American Family" series about a Latino family, even though it hasn't done well in many cities with a small Latino population.

"It can sometimes seem like we're being pulled in many different directions," she said. "It makes it harder, there's no question. I think most television is done by dictatorship. This is a democracy."