Concert takes Springsteen back to his beginnings

Asbury Park, N.J. — Bruce Springsteen kicked off a promotional blitz for his new record with an appearance on NBC's "Today" show Tuesday, welcoming co-hosts Katie Couric and Matt Lauer to the hard-luck Jersey shore city where he got his start.

About 10,000 fans, including Gov. James E. McGreevey, gathered on the city's boardwalk and beach to see Springsteen, whose hits include "Born to Run," "Hungry Heart" and "Born in the USA." Some showed up as early as 6 p.m. Monday, trying to catch a glimpse of The Boss or find a way into the show. 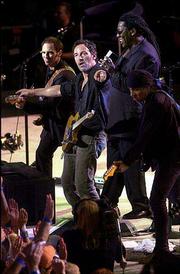 Bruce Springsteen, center, and members of the E Street Band perform inside Convention Hall in Asbury Park, N.J., for NBC's "Today" show. Springsteen performed the title song "The Rising" off his latest album, which also was released Tuesday. With The Boss are Nils Lofgren, left, Clarence Clemons, background, and Steven Van Zandt, foreground.

"I'm just hoping to get a ticket," said Clark Holle, 33, of Maplewood, N.J. "If that's not feasible, I'll hang out on the beach and watch the show."

Large television monitors were set up on the south side of Convention Hall, where Springsteen and The E Street Band performed a rollicking set in front of a live audience of about 2,500 people ï¿½ and an estimated 6.2 million viewers.

Security was extremely tight for the show. A five-block stretch was cordoned off, and Monmouth County Sheriff's officers and police from nearby Wall Township used bomb-sniffing dogs to check vehicles.

Before the show began, speakers blared Springsteen hits as the fans danced and sang along. Asbury Park Police Capt. Mark Kinmon said the crowd was "very easygoing" and no problems were reported.

Several fans brought homemade signs that they hoped to get on air, ranging from "Bruce and Matt ï¿½ It Doesn't Get Better Than That" to "Greetings From Massachusetts" to "Tramps Like Us Are Rising Up."

The appearance and "Today" broadcast coincided with the release of Springsteen's new album, "The Rising," which was inspired in large part by the Sept. 11 attacks.

The record, his first new release with the E Street Band since 1984, strikes a somber tone and includes "My City of Ruins," which the 52-year-old performed last year in the televised "America: A Tribute to Heroes" benefit concert.