Last month, for the first time since 1963, there were no British artists in the Billboard Hot 100 singles chart ï¿½ and now some in the industry here are calling for a music "embassy" to promote their artists in the United States. 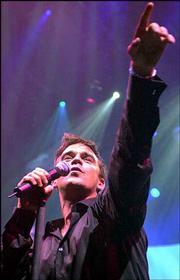 British pop singer Robbie Williams performs during the opening concert of his 2001 tour in Hamburg, Germany. British pop artists are having a tough time in the American market. Last month, for the first time since 1963, there were no British artists in the Billboard Hot 100 singles chart.

Americans who embraced Beatlemania, progressive rock and the New Romantics have been left cold by Britpop and U.K. Garage. A music industry report released this week says the British share of Billboard's annual top 100 albums chart has plummeted from a high of 32 percent in 1986 ï¿½ when bands like Duran Duran, Pet Shop Boys and Simple Minds rode the British wave ï¿½ to just 0.2 percent in 1999 and 1.7 percent in 2000.

Last year, the share was 8.8 percent ï¿½ but more than one-third of the British sales were of a single album, The Beatles "1" anthology.

There has long been a fertile musical cross-pollination across the Atlantic. Americans invented rock 'n' roll, but Britain produced The Beatles and the Rolling Stones. Punk may have started with the Ramones and the New York Dolls, but the Sex Pistols and the Clash inspired a new generation of American punks.

Now, it seems, all the traffic is in one direction. The last British group to take America by storm was the Spice Girls ï¿½ and they stopped making hits four years ago.

This week's British Top 20 singles chart is topped by U.S. rapper Eminem and includes American artists such as Fat Joe and Pink, as well as the Canadian band Nickelback and the Colombian singer Shakira. About half the entries are from Britain or Ireland, with Liberty X ï¿½ a group made up of finalists from the TV show "Popstars" ï¿½ at No. 2.

In contrast, the latest U.S. chart is nearly Brit-free again. Craig David is the highest-ranking British artist, at No. 50.

Industry figures are so worried they have urged the government to set up a musical mission in the United States.

The report published this week, "Make or Break ï¿½ Supporting U.K. Music in the U.S.A.," said a British music office in New York could provide record companies and managers with information, office facilities and industry contacts. The report was put out by the Association of Independent Music, an industry group, and the British Council, which promotes British culture overseas.

"Other countries are having far more impact in the U.S., which is slightly embarrassing and somewhat upsetting," said Guy Holmes, founder of Gut Records.

Some say British acts lack the stamina to make it in the United States. Over the last few years, a stream of British music heroes ï¿½ from Oasis to Robbie Williams ï¿½ have crossed the Atlantic and come back chastened.

According to the industry report, 92 percent of records sold in the United States are by American artists.