Cast of 'Morning's at Seven' finds intrigue at the Tonys

New York — When this year's Tony nominations were announced, there was the usual joy tempered with sorrow. Over at "Morning's at Seven," the feelings were even more intense. 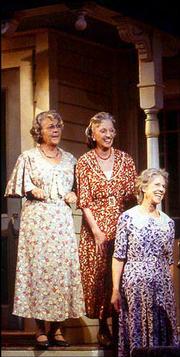 From left, actresses Estelle Parsons, Elizabeth Franz and Frances Sternhagen appear on stage in the Broadway revival of Paul Osborne's drama, "Morning's at Seven" at the Lyceum Theatre. The three women are nominated for Tony Awards in the best-actress category.

You do the math.

"The whole thing is a bit crazy," says Frances Sternhagen, one of the lucky three. "In a way, having any kind of artistic endeavor be judged the way athletic competition is judged is kind of crazy."

Sternhagen, 72, and cast mates Elizabeth Franz, 60, and Estelle Parsons, 74, were nominated for best featured actress ï¿½ a group that between them now has 13 Tony nominations, three wins, an Emmy and an Academy Award.

Sternhagen got the news from a friend on the Tony nominating committee. A well-connected gym teacher told Parsons before her morning workout. And Franz came home to discover her answering machine was blinking madly.

Within minutes though, all three were more worried about the exclusion of the fourth actress in their production ï¿½ Piper Laurie, 70, who they consider as essential as a fourth leg holding up a table.

"We all came to the theater that night and went right to Piper Laurie and said, 'You should have been nominated,"' says Sternhagen. "She said, 'I'm just not going there. It's OK."'

Besides Sternhagen, Franz and Parsons, the featured actress category is rounded out by Kate Burton of "The Elephant Man" and Katie Finneran from "Noises Off."

"We all have the same attitude, which is, 'What? We're all nominated? This is too strange.' I don't think there's any feeling of competition," says Sternhagen, who won Tonys for "The Heiress" and "The Good Doctor."

"With such seasoned actors, you'd think you'd get into ego problems. There hasn't been a moment of that," says Franz, whose credits include "Brighton Beach Memoirs" and a Tony for "Death of a Salesman."

Parsons endorses that wholeheartedly. "We've had no rancor. We've had a really heavenly time right from the very beginning," says the Oscar-winning actress from "Bonnie and Clyde," who has earned four Tony nominations during her career.

That sense of collegiality is unlike the play itself, of course.

Written by Paul Osborn, "Morning's at Seven" explores the long-standing sibling rivalries of four aging sisters who live cheek-by-jowl in a Midwest town in 1939.

Their relationships grow strained when a nearby house becomes available and they begin to jostle over how to live out their remaining years. A long-buried family secret complicates matters even further.

Off stage, the actresses refuse to allow a mere Tony nomination to permit such rancor. Anyway, Laurie is hardly without her own honors, having earned three Oscar nominations, a Golden Globe for "Twin Peaks" and an Emmy.

"Piper is such an incredibly gracious lady that it couldn't possibly ever be awkward," says Parsons. Franz agrees: "In fact, we're laughing at it a lot," she says.