Some of the most memorable photographs in American history will be showcased the next two months at the Truman Presidential Museum and Library in Independence, Mo.

From June 9 to July 28, "FLASH! The Associated Press Covers the World" will be on exhibit at the library, U.S. Highway 24 and Delaware. 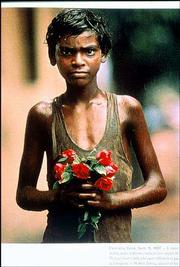 A street urchin waits to pay last respects to Mother Teresa in September 1997.

More than 130 of AP's most unforgettable photos will be featured, including the American flag being raised on Iwo Jima, the fiery crash of the Hindenburg, and President Harry S. Truman grinning broadly as he displays the newspaper headline "Dewey Defeats Truman."

"All the photos that everyone would recognize will be there," said Holly Milledge, the museum's marketing and public relations director.

Among the recognizable photos is Marilyn Monroe posing over a subway updraft. Also, the photo of former Kansas City Royal George Brett kissing home plate at his final game in Kansas City will be part of the sports collection.

"I think the reason it is popular is that so many of the images are immediately recognizable by people," said Clay Bauske, the museum's curator. "It's famous photographs taken by Associated Press photographers of news events, social events, cultural events and sports events. It's sort of a summary of the best photos taken by The Associated Press."

Another photo of area interest is of aviator Amelia Earhart boarding her plane before flying across the Atlantic Ocean.

Bauske said the seven-week exhibit should be a big draw.

Richard Nixon waves good-bye to the American people after he resigned as U.S. president in August 1974.